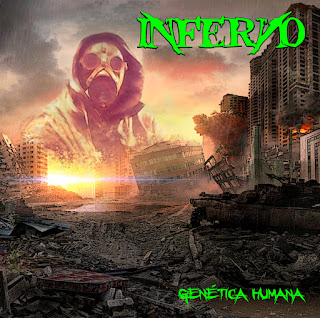 Formed in 2009, the Spanish thrash group under the name Inferno are moving on from the start of a cover band in their home city of Ceuta to become a group holding their own in terms of original material that resulted in their previous EP several years earlier. With original guitarist Joaquin Bravo replaced by Koto, the groups’ debut full-length was released January 12, 2017 on Necromance Records.

From the outset, the group is quite strongly adept at displaying their fascination and intention of exploring the best of the revival scene in earnest. The band clearly takes plenty of influence from the crunch-laden riff-work and pounding rhythms that offers a stylish series of rhythm and tempo changes throughout here that remains the album’s most effective balance of attack. This ends up bouncing freely between straightforward mid-tempo groove-styled rhythms before exploding into a strong stylish gallop that offers far more energy and intensity in the efforts to replicate the old-school tone and feel. The bands’ more fiery and intense riff-work here is a highly intriguing blend of tight, choppy blasts of frenzied riffing swirling into a blistering up-tempo charge that counteracts the slightly sloppier straightforward mid-tempo patterns which move forward at a slight chugging-style groove and gives the music a slight hint of variety that helps to distinguish this one quite ably from the horde of revivalist bands in the genre. This helps nicely with the band’s somewhat by-the-numbers approach elsewhere throughout here as the majority of the music is pretty easily distinguished in that scene and doesn’t offer much else here beyond that factor, keeping this one going along nicely with its intensity and enthusiasm rather than originality. There’s also some moments in the slower sections where it comes off as slightly sloppy in the rhythms and riff-work which can be quite distracting at times here, especially once the production is taken into account which gives this the tone and dynamics of the South American style in terms of savagery that makes the product seem even less than it is. Considering this is a debut, though, it’s not detrimental or crippling.

Despite not being too damaging in terms of real flaws here with it’s lack of originality and somewhat sloppy feel, the fact that there’s a lot of decent work throughout the majority of the album is more than enough to make this a curiosity piece for hardcore revivalist thrash fanatics or those who go for just about any kind of old-school inspired thrash.

Does it sound good? Order it from here:
http://infernoweb.bigcartel.com/product/genetica-humana-cd
Posted by slayrrr666 at 10:12 AM