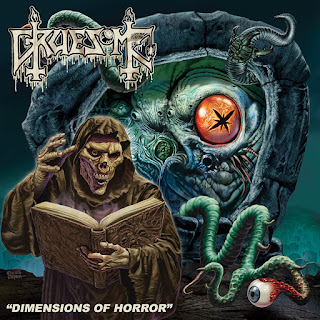 The second release from US old-school death metallers Gruesome condenses the band's sound and attitude into a shorter attack that carries them into the future quite nicely. Composed as a supergroup with a scene of established and credible musicians with a deep history in the scene, this new EP was released May 20, 2016 on Relapse Records.

Unlike most supergroups in the scene, the band has a clear-cut gimmick that they play around with quite readily here. The band here is openly committed to aping the work of early-period death metal legends Death, which results in the band utilizing the same thrash-inspired rhythms and dark, primitive death metal atmospheres which goes for the sort of utterly simplistic, straightforward riff-work that features the intense thrash-driven rhythms alongside the pounding drumming and it works quite well. There’s an immediacy and energy when it displays that style of darkened, feral intensity reminiscent of those early records with the darkened old-school atmosphere that comes through here and is more than enough to offset those simplistic rhythms. It’s all really enjoyable enough if only hampered by the confines of an EP, tending to end right when it gets going and interesting which saps some of the enjoyment out of the effort since the tracks are really getting quite good at that time, yet overall it’s the only section of the album to really find fault with.

Though this one tends to get quite entertaining here when it comes to the actual content of the album and how close it gets to replicating that raw atmosphere, it’s short running time does run against it enough that there’s really enough here for this one to appeal only to fans of the band or the style.

Does it sound good? Order it from here:
https://gruesomedeathmetal.bandcamp.com/
Posted by slayrrr666 at 10:52 AM