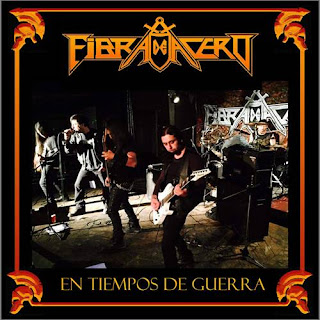 From the Chilean town of Copiapo, heavy/speed metallers Fibra de Acero have been in existence since 2014 but have yet to professionally release anything until now. Their debut release, initially issued independently June 6, 2015 before a June 25 reissue on Sepulchral Silence Records, features six live and two studio renditions of epically-tinged, locally-flavored heavy metal.

The album itself is a mostly straightforward affair, really taking a few rather simplistic touches throughout and weaving them in the course of the music. Rather than tight, swirling speed-metal numbers, instead the riffing here is a lot looser and rawer as befits the mostly-live recording-setting for the material, and there’s a nicely anthemic feel to the music here due to that which manages to get the tracks bouncing along to the mostly simplistic rhythms and sprawling drumming that takes the rhythms along through the rather charging tempos. When it gets a little tighter and delves into the speedier tracks, and especially on the two studio renditions, there’s plenty of fun times with it generating that tight, vicious riffing style and energetic riff-work which is quite more lively than the mostly sluggish patterns featured elsewhere. The ability to tie itself into the local culture with their melodies and arrangements, though, is the main selling point here with it coming across as a really nice touch to include those amongst the more traditional melodies. Still, the fact that the release is comprised of the live material with the studio versions tacked on makes it seem like a slap-shod effort and feels pretty jarring when it could’ve been a more cohesive effort one way or the other. Likewise, the band isn’t the best at adapting the energy quite well with the majority of the tracks pretty plodding and mid-tempo which can be worked out over the future, but otherwise this is still a mostly enjoyable release.

Though there’s some work to be done in terms of effectively managing their energy and intensity throughout their work, there’s still more than enough at play here to make this a mostly engaging effort that will inevitably end up appealing mostly to those who prefer this looser, raw form of South American heavy metal.


Does it sound good? Order it from here:
http://sepulchralsilencerecords.bandcamp.com/album/en-tiempos-de-guerra
Posted by slayrrr666 at 10:45 AM