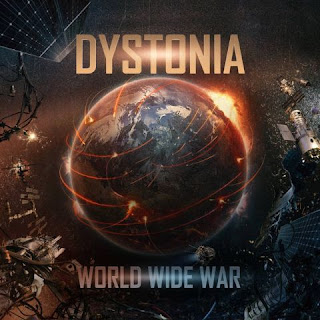 From their 2010 beginning, Russian thrash/death metal band Dystonia have turned their trade on making a rather nice and appealing mixture of modern-sounding death and thrash metal mixed together. Finally unleashing their debut offering, self-released digitally May 9, 2016, this concept album about the near future of humanity, total war, genocide and a worldwide nuclear winter offers up a strong opening impression.

For the most part the album is pretty simple and straightforward, taking the heavy-hitting thrash rhythms and tight, swirling rhythms along through the rather fun, dynamic paces featured here. The riffing is generally tight, crunchy and just a shade about the chug-laced rhythms favored by a vast majority of modern thrashers that creates a fine mid-tempo charge throughout here that does manage to include a scattered amount of fiery up-tempo segments blistering with fine amounts of raging drumming and a far more overt series of old-school riffing rhythms that allow for some rather dynamic sections buffeted against these more violent, vicious sections elsewhere throughout here. It’s not all that heavily flavored with the death metal rhythms at all and really only adds it into select spurts and starts in the tracks which is where this one seems to slightly stumble in that there’s these minor sections that showcase death metal riff-work or just switch down the tempo into a heavier, tighter series of rhythms that signal their death metal influences yet it does so awkwardly against the thrashing which is clearly far more of a priority in their arrangements and patterns. Due to that, it’s unclear whether this is a cause of their inexperience in being unsure how to properly work those into their music as a whole or just a part of their sound that’ll get rearranged as it goes along their career, but yet overall there’s some rather weak transitions throughout that does crop up from time-to-time. The length might be an issue for some, with only the seven original tracks and then the instrumental outro, but overall it’s not really all that much of a detriment at all.

Though it has some growing pains evident throughout here as there’s signs of inexperience crawling throughout here, it has more than enough signs of competence and youthful aggression that it should be a more-than-adequate effort for those looking for some vicious-sounding modern thrash or simply thrash fanatics in the first place.