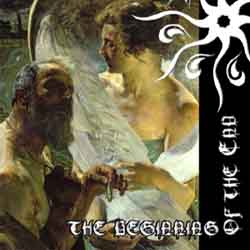 Gathering four bands together, this new split effort containing Italian black/death upstarts Krigere Wolf, Austrian black/folk metal newcomers Waldschrat, internationally-based atmospheric black metal group Notre Amertume and a lone track from Portuguese black/Viking metallers Antiquus Scriptum for a wholly enjoyable mixture and variety present. Released January 11, 2015 on Fallen-Angel Productions, this here is as fine a sampler pack ever unleashed for each of these bands and presents most of them in great fashion.

Starting with Krigere Wolf, their pummeling mixture of frantic tremolo-picked black metal with the dexterous tempo-changes and rather pounding rhythms here makes this quite a ferocious beast, making their swirling tremolo patterns at the forefront to create a dynamic and wholly-enjoyable up-tempo assault that rattles along at consistent speeds for maximum impact and devastation while still managing to successfully incorporate the sprawling majestic melodies in the appropriate manners for the perfect augmentation to the ferocity presented elsewhere. This is easily the best band on the split and really has a lot to like with their three blistering tracks.

With Waldschrat, again the omnipresent use of swirling tremolo patterns is at the forefront though instead there’s a far more pronounced blend of folk-influenced arrangements for the riffing. This still carries itself along quite well with plenty of strong and truly ferocious rhythms presented here, but the blasting tendencies are cut in favor of melodic swirling patterns and rather looser-fitting arrangements that are given a raw edge to the overall work with some great harmonic lines throughout which helps this out infinitely more to give another dynamic impact to the music. Some of the longer sprawling sections seem to go on far longer than they really should but overall there’s a lot to like here.

Up next is Notre Amertume and the international project is the clear weak-link in this offering. The simplistic, sluggish nature of their tracks is hardly impressive next to the other works, and their cliched use of celestial-influenced arrangements, plodding drumming and lethargic doom-like sprawling sections predominant in their music isn’t that enjoyable with numerous other bands attempting those elements at far more pronounced and enjoyable mixtures. The main impetus holding them back is the lethargic, lifeless doom-like paces that don’t really give them much room to really express their atmospheric patterns and in the end their three contributions are on the whole eminently skippable.

Finally, Antiquus Scriptum contributes just a lone track, which is a highly enjoyable one even with all the different elements thrown into it. There’s symphonic keyboards, medieval-sounding horn-blasts, swirling tremolo riffing and more in the near-twenty-minute effort, and it does seem like overkill given the track has no need to go that long and really could’ve been trimmed down into a more digest form. Still, the generally up-tempo pace and convergence of influences makes for an overall fun time here and overall there’s a lot of rather enjoyable work here as there’s at least one or two sections present to appeal to most fans.

Though one of these groups is a clear weak-link and doesn't really leave much of a lasting impression, the fact that the remainder of the bands provide not only incredibly fun and exciting work that this ends up being an undeniably effective introduction to these groups as well as those longing for more bands in each of these styles.