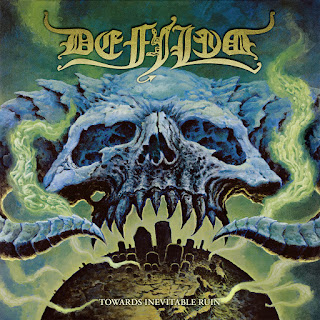 Finally making it to album five, Japanese brutal death metal legends Defiled are certainly known for taking their time with their releases full of uncompromising brutality and relentless technical precision. Taking only five years to deliver a follow-up this time, this samurai clan are poised to follow up the acclaimed of their previous works with this devastating effort unleashed July 8, 2016 on Season of Mist.

Offering a far more organic take than normal in regards to their sound, this one manages to come off quite well in regards to it’s inherent brutality as the tightly-wound paces and overwhelming riff-work take hold quite early here. The galloping pace is quite appropriate here in offering swirling, stuttering rhythms that bring about quite a pummeling style that generates a wholly oppressive feel here. It’s full-on intensity is generated by this stuttering style of riff-work augmented by discordant technically-complex bass-lines and the occasional burst of blasting drumming that whips up veritable whirlwinds of frenzied patterns throughout fully making for a truly brutal and technical offering.There’s really only one element which holds this one back, though, as there’s some that might not find the short length somewhat inviting as the thirty-minute running time might put some off with the feeling that it ends just as it’s building steam. The fact that the album has nothing over three minutes is a minor variance, given that there’s barely any time for the tracks to really work in some nice atmosphere, for their just done and over after some short blasts and frenzied soloing. Overall, this one is still a lot of fun in it’s short pummeling blasts.

Despite some might having a problem with the overall brevity and presentation, the pummeling nature of the rest of the material here is far more impactful with it’s more pronounced brutality and technicality that it remains a viable choice for brutality aficionados, fans of the bands’ past work or extreme metal in general.

Does it sound good? Order it from here:
https://defiledjapan.bandcamp.com/
Posted by slayrrr666 at 7:56 AM