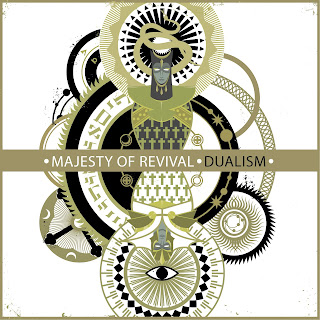 The third full-length from Ukrainian Neoclassical power metallers Majesty of Revival is yet another wholly strong and dynamic effort in their vastly-impressive catalog. Following a year of intense writing and recording, this impressive offering is released June 25, 2016 on Massive Sound Recordings.

Buoyed by the album’s strong riff-work, there’s a strong element charging along throughout the music here as the riffing takes on all series of challenging, progressive work here that offers technically-complex arrangements from tightly-wound speed metal leanings and fine thrash parts to soaring, majestic power metal anthems graced with plenty of fine keyboards running alongside those heavier pieces and tending to give this a widely-ranged and varied effort overall. It’s dynamic and wholly appealing in that there’s a strong attempt at variety here which definitely helps this one keep from overall repetition and familiarity that tends to dominate such material overall, though that plays up the first of the bands’ few small problems. The fact that it includes so many varying elements that the album as a whole is incredibly bloated and overlong, not just with ideas but in tracks as well. This could’ve easily been trimmed down a few songs in the running order to keep it to a more respectable length with this one carrying on with too many tracks featuring their admittedly-enjoyable take on these varied elements being present here and probably could’ve done with some trimming here and there to prune this one down a little. A fine start is the bands’ decision to include some rather obscure elements here as the few attempts at indie rock and more straightforward tracks don’t mesh so well with the more metallic work featured. Still, it’s not as big a problem as the other feature even though taking those out would help the bloated feeling.

There’s a lot of great work to be had here with the band spreading themselves out to include some varied and interesting elements into their core sound for an enjoyable if overlong offering that should really appeal to fans of the bands’ work in the past or those looking to explore the more progressive ends of the genre.

Does it sound good? Order it from here:
http://majestyofrevival.bandcamp.com/album/dualism
Posted by slayrrr666 at 2:15 PM