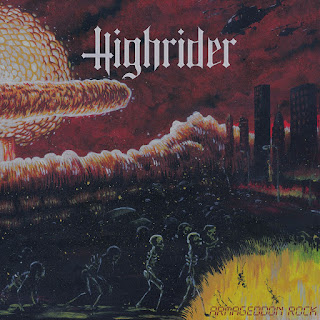 The debut EP from Swedish heavy metallers Highrider starts this group off on a fine note with some enjoyable work here that makes for quite a solid opening impression. The main basis here is on tight, hard-rocking metal with a mostly enjoyable mid-tempo crunch that’s quite nicely propelled along here with the dynamic drumming which fully manages to feature some rather dynamic pairing. With this all being given a solid mid-tempo pace, on top of it all is a series of swirling, majestic keyboards that spin around the rhythms with a fine flair which makes the album take on a far lighter tone and overall approach than what is normally expected in these hard-rocking efforts. Rather than use them in a sense of grandiose symphonics and bombastic rhythms as expected, there’s a nice bit of experimental offerings attempted here with that slight deviation from the norm here which gives this a nicely unique feel. The fact that this doesn’t really merge nicely with the riff-work though tends to draw the music out into far more dragging mid-tempo work than what would usually be the case here as this one doesn’t really generate the kind of enthusiastic or blistering charge of action usually associated with such material and can feel draining at times.

For the most part the songs here aren’t that bad. Opener ‘S=Txl’ uses an extended keyboard melody into a series of fiery churning riff-work with stylish drumming and spirited keyboards bouncing along to a fine up-tempo pace with the majestic keyboards carrying along through the sprawling mid-section and bringing the rocking rhythms into the charging finale for a grand opener. ‘Agony of Limbo’ takes tight, crunchy riff-work and steady, up-tempo pounding drumming along through the hard-hitting series of mid-tempo paces as the blistering rhythms and choppy chugging riffing brings along the spacey atmospheric keyboards along through the final half for another rather enjoyable offering. ‘The Moment (Plutonium)’ features an extended sci-fi intro with spacey keyboards droning over the series of churning riffing as the pounding mid-tempo drumming and simple riffing that continues on alongside the spacey keyboards shine against the mid-tempo rhythms charging along in the finale for a decent if unspectacular effort. Lastly, ‘Semen, Mud and Blood’ uses a fiery, charging series of rhythms with plenty of charging up-tempo drumming with spacey keyboards swirling along throughout the blistering rhythms as the up-tempo patterns, swirling leads and energetic riffing leads move along into the final half for a rousing finishing impression.

There’s a lot here to really enjoyable about this one as the work on the whole is highly enjoyable even with the few minor spots holding it back enough that this one here really serves itself best for those that prefer the slightly more experimental side of traditional heavy metal although all fans of the style are advised to check it out.

Does it sound good? Order it from here:
https://thesignrecords.bandcamp.com/album/highrider-armageddon-rock
Posted by slayrrr666 at 1:03 PM