Blliigghhtted - Into the Cunt of the Witch 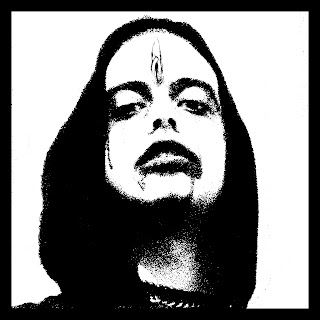 The fourth full-length from Turkish avant-garde black metallers Blliigghhtted offers a highly enjoyable and entertaining variety of chaos and discordance that’s quite scattered but still remains fully coherent. With it’s black metal baseline here, this one tends to feature that generally appealing as the fiery tremolo-picked rhythms and stylish melodies firmly place the band within the genre, and it’s only upon dealing with the bands’ other influences that it really becomes apparent how it all works together. Mixing in ambient soundscapes underneath the main rhythms to create a discordant feel against those more traditional elements, there’s a definite sense of experimentation present as it pushes against the most singularly-defined variation of black metal aesthetics since they’re just so weird-sounding against the fiery tremolo rhythms. That does make for quite a varied and highly enjoyable time here as this experimentation is quite appreciated since it’s just putting slightly off-kilter arrangements within the framework of solid black metal that doesn’t really differ too much from nominal chaotic-influenced groups. The fact that the album does seem to lose steam with the four different sections running through varied elements so that it’s quite hard to make out what each one really means overall since there’s little point in doing so at that stage since it ties nothing together with the different sections featured. That’s the only thing really holds this one back.

The first half sets the stage for this one nicely. Opener ‘Black Flame I: Life Is a Prison’ takes thumping tremolo riff-work and pounding drumming through urgent, frantic patterns with discordant rhythms storming along through the highly explosive swirling tremolo patterns firing off through the finale for a fine and enjoyable opener. ‘Black Flame II: Keep Your Light from Me’ uses thunderous, rumbling patterns and plenty of discordant tremolo riff-work firing along through the frantic, chaotic blasts of furious patterns clanking along to the stuttering rhythms before the abrupt end in the final half for a rather dynamic offering. ‘Black Flame III: Death Is Life’ bleeds through with the furious, frantic drumming and frenetic riffing carrying the explosive atmospheres along through the series of chaotic rhythms blazing along throughout the furious riff-work and chaotic blistering drumming in the finale for a highly enjoyable and engaging effort. ‘Illusion I: Religion’ uses screeching riffing and rather simplistic, plodding drumming throughout the early rhythms before turning into a frenzied series of blasting, pounding drumming alongside the frenetic swirling riff-work leading into the abrupt end in the final half for an explosive and enjoyable effort. ‘Illusion II: Pleasure, Pain and Pedophilia’ bleeds through the frantic, frenzied riffing and blistering drumming with a series of swarming tremolo riffing carrying on alongside the frenetic tempo as the chaotic swarm of blasting rhythms carries on into the finale for the album’s highlight as a singular track. ‘Illusion III: Suicide Is Painless’ uses swirling tremolo riffing with plenty of tight, mid-paced blasting and a darkened atmosphere as the churning death-metal styled grooves give way to more of a chaotic blast of fiery classic tremolo-styled riffing and pummeling drumming that carry on through the final half for another solid highlight.

The second half is certainly just as fun and lively as the first half. ‘Death I: Unknown, Unknowable, Uncertain’ features swirling tremolo patterns and frantic, chaotic drumming blasting along throughout the frenetic thumping drumming leading into the finale for a short, disposable interlude that does setup the following track ‘Death II: Ejaculating into Darkness’ as the swirling, plodding rhythms and rather fine mid-tempo industrial collages continue on throughout into the later half where the blasting drumming and frenetic, chaotic patterns charge on through the blistering tempos in the final half for another strong singular effort. ‘Death III: Black Flame Is Refusal’ takes a swirling mid-tempo tremolo riff through a stilted series of plodding tempos against the plodding drumming as the frenzied, chaotic blasting carries along into the strong series of chaotic rhythms in the finale for a strong effort overall. ‘Suicide I: Chaos Everywhere’ leads a tortured scream into a series of plodding mid-tempo riffing with plodding tremolo riffing alongside the frantic blasting drumming that settles into a wholly chaotic series of blinding drumming bristling along through the tremolo riffing in the final half for a highly scathing effort. ‘Suicide II: Naked Life’ takes frantic swirling tremolo patterns and plenty of blasting drumming along through the pummeling tempos filled with scorching patterns and furious, frenzied riff-work with plenty of dynamic tremolo patterns along throughout the series of blistering tremolo patterns into the finale for a wholly enjoyable effort. Lastly, ‘Suicide III: Certainty Is Illusion’ uses a plodding sound-collage intro with plenty of stylish drumming and thumping mid-tempo tremolo riffing that extends outward into the series of swirling atmospheric breaks all throughout the extended mid-section and carrying on through the discordant riffing in the final half for an extended and overlong lasting impression.

Though there’s some misfires here and there along with the overall brevity of this effort, there’s still overall plenty to like and enjoy about this releases as it still features a lot of the trademark rhythms and elements present that it should appeal to those who enjoy and appreciate this chaotic breed of black metal or extreme metal in general.

Does it sound good? Order it from here:
https://blliigghhtted.bandcamp.com/album/into-the-cunt-of-the-witch
Posted by slayrrr666 at 7:00 AM