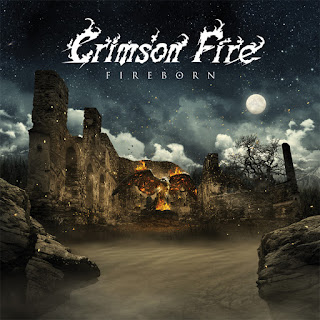 The second full-length from Greek metallers Crimson Fire continues their ploy of mixing the stylings of old-school heavy metal and power metal crunch. This here is incredibly straightforward and rather unsurprisingly simplistic music here, simply taking the form of classic heavy metal with vibrant fiery melodic power metal melodies over the top of everything. The underlying rhythms here are tight, to-the-point and offering the kind of classic metal crunch usually favored by the more mid-tempo groups in the style, leaving this one with a solid, heavy thumping backbone that take full-advantage of weaving them throughout in an unwavering fashion. Sprinkled nicely amongst these dense rhythms is the band’s penchant for sterling, soaring melodic leads and soloing that comes into play here, giving this a rather fun and engaging majestic gallop to the heavier rhythms offering the variations of the type. The fact remains though that despite this enjoyable enough presentation their so simplistic and straightforward that the band offers virtually no varied approaches or styles throughout here, as the one attempt at a ballad turns back into a mid-tempo cruncher which is the only real variance within the music and it does make this quite a one-note album overall. This here really could’ve been one to try something to give it a little more variety, which does hold this back somewhat.

The first half starts this off nicely. Instrumental intro ‘Awakening’ features sterling soaring melodic leads building to an epic feel that sets the stage for proper first track ‘Take to the Skies’ with charging riffing and crunchy rhythms with the steady mid-tempo drumming winding along at a steady straightforward series of rhythms with fiery charging leads carrying on through the solo section and bringing the tight patterns on into the finale for a strong opening blast. ‘Right Off the Bat’ uses a light acoustic intro with a charge into stylish mid-tempo gallop full of crunchy riffing and steady straightforward drumming that holds the simplistic pace on through the fiery melodic leads of the solo section and leading through the final half for a strong and enjoyable effort. ‘Young, Free, Lust’ uses a swirling grandiose series of riffing with plenty of tight crunchy patterns and sterling mid-tempo rhythms holding on through the anthemic arrangements keeping the solid melodic leads at the forefront against the solid mid-tempo patterns leading into the finale for a rather fun and engaging offering. ‘Hunter’ takes swirling melodic riffing and crunchy mid-tempo patterns running along throughout the series of charging fiery melodic leads in the steady mid-tempo series of rhythms into the solo section and carrying on through the final half for another solid enough offering. ‘Bad Girl’ utilizes rocking swirling riff-patterns and blistering crunchy patterns through a rocking up-tempo pace with the fiery melodic leads and dynamic, crunchy dum-work carry on through the series of blistering rhythms of the solo section and leading into the finale for a strong highlight.

The second half is still rather fun if somewhat lacking against the first half. ‘Master Your Destiny’ takes light, melodic riffing and solid, straightforward leads with plenty of simplistic rhythms holding the anthemic pace along through the gradual series of straightforward rhythms leading into the solo section and continuing on through the final half for a decent-if-unspectacular effort. ‘Knightrider’ takes frantic swirling riffing and furious speed-drenched rhythms racing along at rather frantic paces with plenty of tight, frantic frenzied patterns at blistering tempos as the frantic patterns race along with the furious melodies through the solo section and thumps along to the charging finale in the clear-cut highlight effort. ‘Only the Brave’ offers strong majestic melodic leads and dexterous galloping drumming carrying along through a strong mid-tempo series of patterns with the steady crunchy rhythms holding on through the sprawling mid-section that carries the soloing into the rather tight and crunchy final half for a strong and rather enjoyable track. The semi-ballad ‘Her Eyes’ features light acoustic noodling amid spacey keyboards into a soft, romantic feel that carries along through the tough blistering series of rhythms with plenty of tight drumming and crunchy riff-work carrying on through the finale for a rather decent enough effort that works better in the more up-tempo areas than the softer rhythms early on. ‘Vengeful Spirit’ uses fiery, crunchy rhythms and plenty of steady drum-work taking the simplistic riffing along through the majestic galloping tempo with plenty of rather fiery melodies carrying on through the solo section and bringing the steady melodic rhythms on through the final half for another rather enjoyable effort. Lastly, album-closer ‘Eternal Flame’ takes strong swirling rhythms alongside the steady mid-tempo crunch of the drum-work with plenty of fiery rhythms carrying along through the steady rhythms as pounding melodies and tight crunchy riffing hold on into the solo section and lead into the finale for a wholly enjoyable lasting impression that ends this on a positive note.

Though the band does tend to play it safe from time-to-time, there’s plenty of elements that do work here in their sound that they remain a fine choice overall for fans of the Greek scenes other classic heavy/power metal bands or those looking for a starter band in that genre since they are evocative of the style without being at the top of that style.

Does it sound good? Order it from here:
https://pitchblackrecords.bandcamp.com/album/fireborn
Posted by slayrrr666 at 11:11 AM