Ragestorm - A Thin Line Between Hope and Ruin 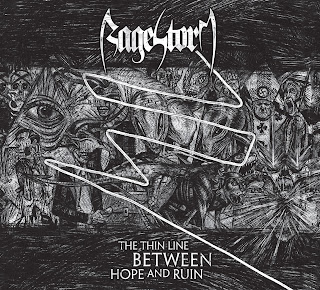 The debut full-length from Italian death/thrashers Ragestorm shows the effects of a band in such a situation while also offering plenty of promise for what’s to come in their career. For the most part this one carries along the type of melody-infused riff-work that seems to play through that style without any deviation. Switching between tight chugging and extra-sloppy swirling melodic runs in the guitar-work, there’s a pretty simplistic energy attributed to the tracks here that occasionally brings up some fire from time-to-time, though the majority of this one gets stuck with those chugging rhythms holding the paces down in the mid-tempo for the most part. These tend to feature so many rather bland and plodding rhythms that they’re wholly lifeless at worst, while the best effort about them is that they’re decent-if-unspectacular. This applies to an overwhelming majority of the album as well, which tends to leave this staggeringly overdone and seemingly just filler material on the whole. Even more to the point there’s a wholly unneeded and just plain needless interlude to the album which is a droning and endless industrial collage that plays over a sampled speech that’s just pointless and seemingly included for no real reason which makes this a deviation to the whole effort since this one doesn’t bring up the points in the speech overall and the whole thing is just such a painful experience. This pointlessness of this really showcases the early point of the bands’ career at the fullest and should not be continued in the future.

The first half here is decent enough if not all that impressive. Opener ‘The Meatgrinder Theory’ features a sampled chainsaw reviving intro leading into driving drumming and stellar riff-work through the steady mid-tempo series of riff-work through a fine charge as the soaring melodic leads carry through the solo section and bringing the tight chugging through the final half for a solid opening effort. ‘Debt Ritual’ brings tight, crunchy riffing and blistering drumming churning along through a frantic, mid-tempo pace with plenty of slight chugging rhythms and steady riffing carrying along through the stuttering main patterns carrying into the solo section and working through into the finale for a somewhat decent if overall unimpressive effort. The short and brutal ‘Polysilicotetrapropryvinylfluorethalene’ features immediate blasting drumming and rather frantic swirling riff-work charging along at butal, blistering charging patterns with the choppy rhythms leading to the tight, driving final half for a rather enjoyable effort for the album’s clear highlight. ‘Moloch’ features light acoustic riffing amid crackling noise before quickly turning into a simple, straightforward plodding chugging series of riff-work with plenty of pounding drumming keeping the simplistic elements firmly along through the utterly ferocious finale for an impressive finish to a bland effort previously. ‘Idiocracy’ takes churning drumming and swirling riff-work through the mid-tempo chugging paces with simplistic rhythms and frantic patterns churning along with the chugging riff-work leading along to the fiery solo section and bringing the energy back into the final half for a decent if unspectacular effort. ‘Acid Tears’ immediately blasts through frantic razor-wire riff-work with plenty of solid swirling patterns charging along through the simplistic paces charging along into the dynamic, fiery solo section and carrying the straightforward rhythms along throughout the finale for a rather enjoyable effort.

While the band is clearly still going through the learning curve when it comes to their style and energy, there’s enough elements at play here to work with in the future that it could serve them well whenever they carry on which leaves this one still only for the most devout fans of the style as a whole at this point.

Does it sound good? Order it from here:
https://www.facebook.com/ragestormofficial
Posted by slayrrr666 at 9:36 AM