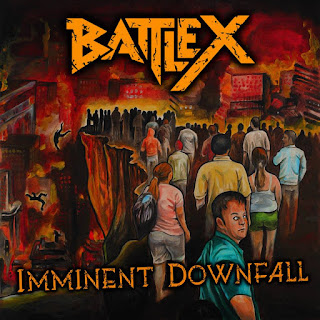 Slovenian thrashers BattleX have been in existence since 2007, and quickly unleashed their first EP several years later before honing their craft in the following years before their new release. Self-released January 21, 2016 six-years after their first release, this comes off as quite a fun and enjoyable mix of traditional and thrash metal.

This is an overall enjoyable album which maintains a lot of it’s enjoyment with the fact that there’s a solid backbone to work with here as the album tends to feature the kind of mostly up-tempo series of rhythms with plenty of solid swirling riffing to bring out the thrash feel here. Those energetic and somewhat driving rhythms are taken along quite nicely here with the album’s more thrash-centered moments that are nicely worked into the majorly up-tempo numbers, and comes off rather nicely with the crunchy traditional metal rhythms throughout here. This produces a solid mid-tempo pace here with far more simplistic riffing and some stylish elements featured here to really make for a rather lighter balance to the harder-hitting rhythms. That tends to bring out the main factor against this album with the whole effort feeling quite bland and somewhat lacking in terms of the driving intensity usually required in the top-tier thrash acts, as the more trad-flavored rhythms drain a lot of the energy out of the tracks with their mid-tempo leanings. It’s not nearly as noticeable in the faster, driving sections of the tracks as that's where the true sound of the band gets released in it’s finest state, though again considering this is still a debut effort a little bit of leeway is granted at this stage in their career.

It’s not the most blistering take on the style, though there’s definitely enough working for it here that it comes off with enough rousing energy and moments of effectiveness that this is a solid choice for those looking for a more traditional lean in their metal or not a true fan of thrash wanting a little extra exposure alongside more preferential elements.

Does it sound good? Order it from here:
https://battlex.bandcamp.com/releases
Posted by slayrrr666 at 1:02 PM