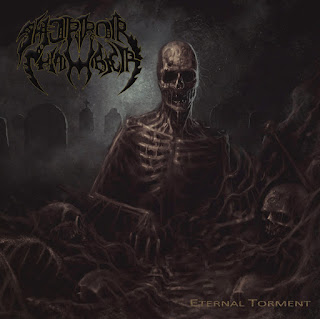 In existence since 2004, Brazilian death metallers Horror Chamber has had sporadic releases since with only a demo and an EP before this new release, after a seven-year delay between these releases as well. This debut full-length, released April 24, 2016 on Distro Rock Records, this contains eight total tracks including two brief instrumentals of churning old-school death metal.

This here manages to nicely capture the old-school feel and tone of the early death metal scene quite nicely with the riffing taking a large majority of that feel. Whipping along at frantic, fervent tempos with primitive thrash stylings as the main choice of attack, there’s a violent intensity dragged out of the riff-work when it remains at those mid-tempo paces yet generates even more greater feelings when it fires up the paces into a far more generous and blasting pace. Offering far more blastbeat-driven rhythms and churning riff-work alongside the tight patterns and thrashing arrangements that makes for a wholly more engaging and appealing experience buffered together and are generously chosen to accentuate select areas of the tracks rather than just barrel along as would be more obviously utilized in the writing which greatly benefits a more veteran approach than expected. Even slowing down the tempos into lurching, doom-like paces for the solo sections works nicely by contributing to the oppressive old-school atmosphere while enhancing the overall heaviness apparent elsewhere in the rhythms, all of which is greatly appreciated. Still, there’s the minor issue here of this one suffering two minor problems, first in the fact that there’s two brief, minute-long interludes here that really don’t need to be featured here as the other flaw, featuring only eight tracks in total, means that every available space must be maximized to generate lasting impact, and wasting that time on two non-essential throwaway breaks like that in the space crunch that it’s already under seems quite illogical as it holds this to a few original tracks that seems over before it really started. Otherwise, this one really has a lot to like.

Despite suffering a few minor issues that are not in the slightest bit concerned with their performance but rather their rather curious  inclusions in the end leaves this one really impressive overall that should wholly appeal to any aficionado of South American death metal, old-school death metal or extreme metal in general.

Does it sound good? Order it from here:
www.facebook.com/horrorchamber666
Posted by slayrrr666 at 1:33 PM