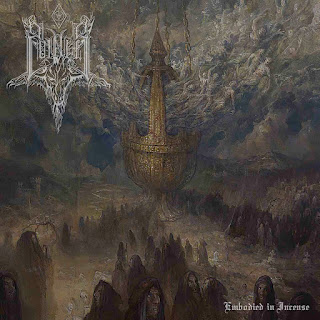 The second full-length from Slovenian black metal horde Cvinger offers another solid slab of pristine, chaotic-sounding old-school black metal to make it two solid epics in a row following their great debut. Offering frantic and brimstone scented tremolo riffing which nicely echoes the traditional second-wave acts in the mid-90s, there’s a bouncy and enjoyable up-tempo feel to the music here that contain a vicious old-school streak to their rhythms. As well, there’s the ability to meld those swirling tremolo riff-works alongside a more pronounced and chaotic series of frenzied drum-blasts that adds a blast-heavy approach to the music in conjunction to the more intense and blistering riff-work, and they stand-out all the more so on the album against the moody atmospherics featured in the lone slow, churning epic offering up some stylish variety. This alone makes it a rather strong and enjoyable enough effort to really make a strong impression here if only it didn’t rely so heavily on the use of short droning industrial interludes so often here, as there’s three of them spread out to open, close and partway through the album as a breather of sorts to set up the second half. It’s odd that this placement occurs here as it does interrupt the flow of the record where it’s just getting interesting and then breaks off into the brief, under-a-minute set-up before going through several more tracks and then back into a droning finale which is a little off-putting, yet as a tactic that was repeated from their debut it does have a minor pass associated with it going through the motions.

The first half here gets this going nicely. Set-up instrumental intro ‘Chapter 1: Conjuration of the Dead God’ uses a deep chanting speech with churning samples to set the stage for proper first track ‘Psalm, of a Hollow Man’ which features tight, ravenous swirling rhythms and utterly dexterous and blasting drumming over the traditional-sounding arrangements from the tremolo-styled rhythms that run through the fast, frantic tempos firing through the frantic blastbeats into the churning final half gets this off to a solid start. ‘Beheading the Desert Prophet’ uses immediate blasting drumming alongside the dynamic riffing with plenty of churning up-tempo patterns to the swirling rhythms that sweeps along to the mid-tempo churning tremolo patterns throughout the blasting finale for another strong effort overall. ‘Enchanted Conclave’ starts with tight, churning riff-work and blasting drumming that turns into a frenzied up-tempo blast of swirling tremolo patterns and intense leads that work along through a series of mid-tempo sprawling sections that blast back into the frenzied rhythms in the blasting finale for a wholly enjoyable highlight. ‘Weak to the Gallows’ uses a steady, slow build-up with gradual drumming and a steady churning series of riffing that holds the darkened atmosphere nicely alongside the switchover into the frenzied blasting with plenty of furious drumming and tremolo patterns on through the final half for a decent enough effort against the more explosive other efforts.

The second half is a little weaker with the interludes but still has a lot to like. Mid-album instrumental breather ‘Chapter 2: Eye Carved upon the Serpents Stone’ features dark rumbling noise and sampled screeching effects leading into next track ‘Martyr Shrine’ bleeding through with the tight tremolo picked rhythms and frantic blasting drumming with plenty of fiery rhythms charging along through the blasting atmospherics as the pounding drumming holds the steady tremolo pattern leads flowing through the finale for a strong highlight effort. ‘Infinity of the Black Flame’ features a slow-building series of churning riff-work and blasting drumming that weaves along through a sprawling series of plodding atmospheric rhythms before churning back through the blasting drumming and frantic mid-tempo tremolo riffing for the final half in another somewhat decent enough effort. The  title track slowly works through rattling rhythms and tight clanking drumming that keeps the mid-tempo rhythms along through the frenzied riff-work as the feverish rhythms and choppy drumming weave alongside the buzzing riffing into the finale for a strong highlight. Lastly, the instrumental outro ‘Chapter 3: Amen III’ uses sampled crackling fire sounds and unearthly groaning against the backdrop of droning noises which isn’t that bad of a final track but just sticks out even more here with all the other interlude tracks here which isn’t all that bad of a lasting impression.

Though there’s a minor problem to be had with the album’s structure with all the brief instrumental interludes holding up the pacing, there’s still more than enough blasting chaos and frenetic bombastic on display to really make this a hearty choice for those looking for more second-wave styled black metal or are just fans of the style in general.

Does it sound good? Order it from here:
www.cvinger.si
Posted by slayrrr666 at 1:54 PM