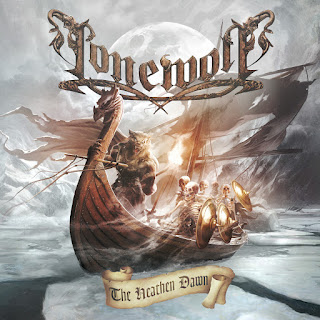 Artist: Lonewolf
Release Title: The Heathen Dawn
Year: 2016
Label: Massacre Records
Genre: Heavy/Speed Metal
Tracklisting:
1. A Call to Wolves
2. Wolfsblut
3. Demon's Fire
4. Keeper of the Underworld
5. When the Angels Fall
6. Until the End
7. Rise to Victory
8. Heathen Dawn
9. Into the Blizzard
10. The Birth of a Nation
11. Song for the Fallen

The eighth full-length effort from French heavy/speed metallers Lonewolf continues on with their sound that’s been there from the start and makes this an unbelievably enjoyable release. The album carries on their tried-and-true standard of unleashing the classic heavy metal sound being brought aboard here. Mainly swinging from the more rousing, energetic patterns that contain tight, swirling and hard-hitting riffing filled with speed-metal patterns, furious straightforward marching and blistering drum-work that winds through the majority of the album here with the slow-down periods using more majestic marches with mid-tempo patterns working through the simplistic paces coming into play nicely there’s a lot of great work throughout here. While on the whole this makes for a wholly engaging time here, the whole structure of this one is what really stands-out as being the only real damaging effort throughout here the two different overall styles are split-up across here which leaves the first half rousing and energetic while the second half is slightly more mid-tempo. This is somewhat perplexing and doesn’t really offer a very smooth transition into the different sections of the album though this doesn’t diminish the content of the album as it’s more a set-up flaw than a musical one.

The first half here is where this one really stands out nicely. Opening instrumental ‘A Call to Wolves’ features epic orchestration and simplistic riffing to bridge an air of impending intrigue as proper first track ‘Wolfsblut’ bleeds through with charging melodic riff-work and dexterous drumming swirling along through galloping melodic rhythms chugging along through the main rhythm leads as the glorious backing shouts keep the steady up-tempo pace into the fiery, swirling solo section and leading along into the frantic final half for a stellar and highlight opening. ‘Demon's Fire’ uses blistering, fiery chugging riff-work and scalding up-tempo drumming propelling along into a steady mid-tempo gallop that charges through fiery thrashy rhythms leading into the twisting solo section and bringing the utterly furious speed metal riffing into the finale for another spectacular highlight. ‘Keeper of the Underworld’ features light trinkling and soft patterns in the early half before settling into a more traditional mid-tempo rhythms and plodding drumming as the more energetic patterns carry along through the dynamic solo section and carry into the charging final half for another solid, enjoyable effort. ‘When the Angels Fall’ uses discordant riff-work and plodding drumming alongside the blaring, steady bass-lines that move along through a simplistic and steady pace as the discordant patterns lead along through the steady patterns with the fiery solo section leading into the finale for a decent if unspectacular offering. ‘Until the End’ takes simplistic melodic leads over plodding, charging rhythms carries the middling tempos along throughout the first half as the change-over into more fiery melodies kicks the energy up into more charging solo section and leading the mid-tempo rhythms into the final half for a solid effort overall.

The second half is a little lower but still has a lot to offer. ‘Rise to Victory’ offers fiery up-tempo chugging rhythms and pounding drumming carrying the engaging up-tempo series of speed metal riff-work through the blistering tempos with the furious charging rhythms carrying into the dynamic solo section and keeping the energy throughout the finale for another blistering highlight. The title track takes swirling mid-tempo patterns and a strong series of melodic leads into the plodding mid-tempo patterns bringing the fiery mid-tempo sections letting the frantic rhythms carrying into the surging melodic solo section and into the final half for a solid and enjoyable effort. ‘Into the Blizzard’ takes grandiose swirling leads and charging mid-tempo riff-work leading through the sluggish opening that explodes into furious speed metal lashings with plenty of swirling leads and dynamic drumming along through the solo section and breaking along through the frantic finale for another high-energy effort. ‘The Birth of a Nation’ takes an epic and charging rhythm and stellar melodic leads through plodding mid-tempo patterns with plenty of steely epic riff-work keeping the epic grandiose rhythms along through the swirling fiery solo section and charging into the majestic march through the final half for a highly enjoyable effort overall. Finally, album-closer ‘Song for the Fallen’ takes a simplistic and majestic mid-tempo march offering plenty of plodding rhythms and straightforward riff-work allowing the dynamic epic rhythms to carry the steady, simplistic pace along throughout the sing-a-long choruses and through the majestic solo section with the bombastic energy carrying through the finale for a highly enjoyable lasting impression.

While there’s nothing really wrong here with the music on this release, the slightly disproportionate set-up of the running order is only enough of a minor let-down but not enough of a truly detrimental problem that it’s still highly recommended to fans of the bands’ previous works, the style in general or fans of classic traditional metal.