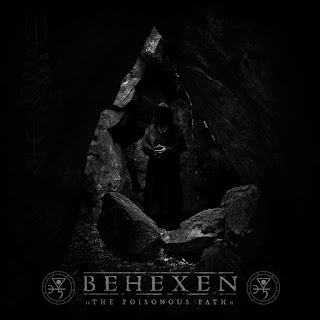 The fifth full-length from Finnish black metallers Behexen offers a glimpse of the bands’ true power and devastation that has carried them thus far into their career. Loaded with swirling tremolo-picked rhythms that carry a frantic sense of chaos that recalls the main patterns of the second-wave groups but carrying on with that intensity found more often in Swedish groups where those types of riffing arrangements are given a boost by the utterly ferocious drumming that truly sounds like a cacophony blasting along throughout here. The other big element found here, the extended droning and mid-tempo charge that comes into play here with offers a rather enjoyable amount of variation present while still being somewhat similar in style to the album’s main tone overall. Though this all makes for a wholly enjoyable set-up, the fact that this one does have a rather odd set-up in regards to it’s structure is rather curious. The first half of the album is set-up and filled with more of the blasting, chaos-filled tracks, while the second half this changes into extended, far longer pieces that are driven along more by the mid-tempo gallop with occasional bursts into more frenetic endeavors before settling in on the mid-tempo work, so it’s all curiously split without more balance between them.

The first half here offers a spectacular look into their work. The title track takes an extended eerie intro that blasts into ravenous chaotic drumming and relentless swirling tremolo rhythms pounding along at furious, frantic patterns as the furious, charging rhythms charge along at frantic, blistering tempos full of savage riffing into the finale for a strong, impactful opener. ‘The Wand of Shadows’ also uses the eerie opener that explodes into frantic blasting drumming with plenty of charging tremolo rhythm-work charging through the stylish buzzing tremolo-pitched patterns into the frantic series of blasting drumming and riffing that works through the final half for another strong, solid offering. ‘Cave of the Dark Dreams’ blasts into immediate and ravenous drumming with plenty of blistering rhythms full of tight swirling mid-tempo tremolo riffing that takes on a frantic up-tempo series of riff-work that plows through a frantic series of blasting drumming and intense patterns through the sampled finale for a rather enjoyable highlight effort. ‘A Sword of Promethean Fire’ uses swirling mid-tempo riffing and plodding paces to hold to a steady rhythm as the droning tremolo riff-work gradually picks up into a full-on explosion of blastbeat-filled drumming alongside the driving intense tremolo patterns leading into the gradual fade-out final half for a strong and enjoyable effort. ‘Umbra Luciferi’ charges forth with immediate blasting drumming and furious riffing as the full-throttle tremolo riff-work continually swirls around frantic blasting patterns before setting into a stellar mid-tempo gallop with tremolo-picked patterns leading into the fade-out finale for a wholly enjoyable and blasting highlight.

The second half is slightly hurt by the epics but still has a lot to like. ‘Tyrant of Luminous Darkness’ works through a scathing series of blasting drumming and utterly ferocious tremolo riffing that rips and saws through varying dynamic blasts of dramatic technical rhythms that charges along frantically blasting into the swirling tremolo riffing and letting the extended ambient section wander through the final half for a truly blistering highlight. ‘Chalice of the Abyssal Water’ uses a quick middling intro to give way to a swirling series of intense tremolo riffing and furious, frantic up-tempo blasting drumming that continually charges along with the tight swirling rhythms that drop off into rather stylish plodding arrangements of swirling riffing leading into the finale for a somewhat overlong but enjoyable effort. ‘Pentagram of the Black Earth’ features utterly ferocious drumming and up-tempo swirling tremolo riffing bouncing along to a frantic gallop with plenty of furious blasting carrying on through the tight sprawling section leading into the tight final half for the album’s best song overall. ‘Gallows of Inversion’ uses an extended droning noise intro that gives way to immediate blasting drumming and frantic tremolo rhythms full of swirling intense patterns bringing the furious, frantic energy along through the few sprawling sections and more furious rhythms into the finale for a solid enough offering. Finally, the epic album-closer ‘Rakkaudesta Saatanaan’ takes the extended industrial droning intro to turn into a series of mid-tempo swirling tremolo rhythms and simple, steady plodding drum-work that holds the mid-range work along at an even rhythm as the eerie melodic leads charge forth alongside the return to blistering drumming and charging tremolo patterns into the final half for a rather enjoyable lasting impression.

On the whole this is a truly strong and highly enjoyable effort that doesn’t offer up too many truly troubling areas at all with the music within it yet curiously falls only through it’s track arrangement, leaving this one as a readily recommended piece perfect for fans of the style, Finnish black metal or just dark extreme metal as a whole.

Does it sound good? Order it from here:
http://www.debemur-morti.com/en/behexen/556-behexen-the-poisonous-path-digipack-cd.html
Posted by slayrrr666 at 12:38 PM