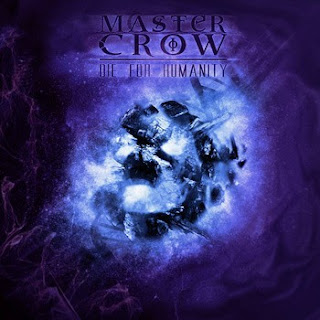 The second full-length from French melodic death metallers Master Crow brings along plenty of highly enjoyable elements to make for one of the most explosive and enjoyable offerings in the style. The main segment at play here is the fact that the riff-work is just simply overwhelmingly technical and frantic, whipping up sizeable storms of complex chugging patterns driven along with plenty of ferocious industrial intensity, leaving this one to bring along the sort of blistering rhythms and cold, mechanical feel that’s simply devastating. The approach works in spades with the differing rhythm styles come along with the melodic leads that adds an accessible tone to those mechanical chugging patterns, furthering the overall enjoyment factor of the album with the wholly appealing facet where it’s complex and challenging rhythms that retain a wholly listenable approach with some appropriate and engaging melodies thrown into the mix. With the admittedly-triggered-yet-devastating drumming providing the kind of blasting dexterity for these cold rhythms to truly thriving here produces the last fully enjoyable element at play here to really present this as a dynamic offering. There’s rather small figure where this one does tend to hold this back is the fact that the album can feel quite limited and one-dimensional, never really moving along through much in the way of variation or dynamics and really keeping it centered quite locally around those distinct elements. Still, it’s engaging enough for a wholly enjoyable listen.

The second half here is a little lower than the first half but does have a lot to like as well. ‘Staind in Blood’ uses buzzing chug rhythms and mechanical patterns through a series of furious breakdowns that whip along through a wholly frantic and furious blast of blazing technical chugging alongside the blasting drum-work that chops along through the final half for a blazing highlight. ‘Born to Be Crucified’ takes stuttering technical rhythms and frantic mechanical rhythms with pummeling drum-work carrying along through the stuttering tempo as the melodic rhythms carry along through the explosive swarm of up-tempo rhythms along through the breakdown-laden solo section and on through the finale for a strong and overall enjoyable effort. ‘Eye of the Troll’ takes blistering, blazing drumming with plenty of tight, choppy technical rhythms alongside the furious technical, challenging riffing with plenty of stellar polyrhythmic runs along through the tight breakdowns as the choppy melodic leads carry the frantic paces along through the sprawling final half for a decent and enjoyable offering. Closing with the Theo Holander version ‘Down from the Sky’ which doesn’t really offer much of a difference from the earlier normal version and doesn’t offer enough of a change that there’s any reason for it to be included here  as it’s the same blasting drumming over frantic technically-challenging chugging that appeared on the other version, leaving it a curious inclusion overall.

Though there’s some minor, barely negligible questions about the album as a whole, there’s quite a bit still to enjoy here which makes this a formidable release that should appeal not only to those who appreciate and enjoy the absolutely pummeling technical work featured or fans of the band or their members’ other works.

Does it sound good? Order it from here:
http://mastercrow.bandcamp.com/releases
Posted by slayrrr666 at 12:12 PM