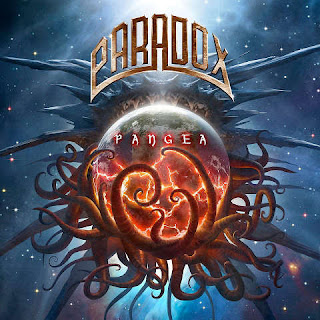 The seventh effort from German thrashers Paradox once again shows them as perhaps the most underrated and overlooked of the scenes’ acts and continues their legacy nicely. Much like their previous efforts, this here is basically set-up to feature their classic speed/thrash metal and churning power metal melodies into one raging mixture. Taking tight, crunchy patterns more influenced by the Bay Area style with the occasional burst into a melodic mid-tempo chug, this here manages to spell out many of the band's trademark rhythms here and gives this a solid thrashing energy. Those are driven along by a rather frantic and impressive amount of technicality in the riff-work which adds a superb amount of energy and dynamic bounce to the material alongside the excess melodies that makes for a soothing and utterly appealing mixture here that plays much like the band’s signature style from the very beginning.

The second half here is slightly lower than the first half but still comes packed with highlights. ‘Cheat & Pretend’ takes a simple mid-tempo churning rhythm and plodding mid-tempo drumming brimming with plenty of steady melodic patterns in the riff-work holding this in a very simple, straightforward pace leading into the solo section and leading along through the finale for the album’s first real bland effort. The title track features buzzing discordant riffing to lead into stellar and frantic thrashing patterns with stellar mid-tempo churning riffing leading through the fiery arrangements leading to the melodic solo section and letting the energetic riff-work and pounding drumming carry the frantic tempos in the finale for an absolutely stellar highlight that gets this back in action perfectly. ‘Vale of Tears’ offers melancholic riff-work and light ambient rhythms throughout the soft patterns with a gradual appearance of pounding drumming alongside harder arrangements switching along between the different styles as the churning solo section carries the plodding tempos into the final half for another rather bland effort. ‘Alien Godz’ features churning mid-tempo riffing and pounding drumming to eventually settle into a blistering charge full of speed-drenched riffing and plenty of pounding drumming carrying the frantic, fiery rhythms and blasting drumming that fires through the solo section and carrying along through the finale for another strong, impressive offering. Finally, album-closer ‘El Muerte’ uses a tight, thumping technical series of riff-work and pounding drumming with plenty of challenging rhythms leading into plenty of fiery patterns and pounding drumming carrying the high-speed rhythms along through the swirling solo sections and charging along to the frantic final half for a bruising and dynamic highlight that ends this on a high-note.

For a band to remain as consistent and enjoyable as they’ve been from the beginning makes them one of the undervalued and overlooked heavyweights in the style with ease as this is another stellar addition to their discography and makes for a superb choice for thrashers in general, aficionados of the more classic metal sound or just those looking for good solid metal in general.


Does it sound good? Order it here:
http://shop.afm-records.de/en/paradox-pangea-en.html
Posted by slayrrr666 at 9:12 AM