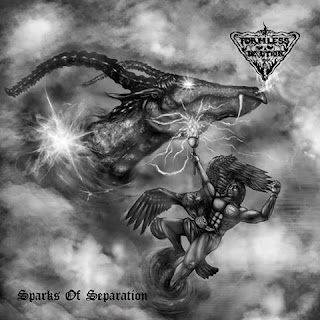 The debut effort from South African black metallers Formless Devotion comes off as rather appealing for the most part and serves them as a potential band to watch for in the scene. Despite appearing for the most part as a rather traditional nature, there’s plenty to enjoy here with this set-up as there’s the usual tremolo riffing, furious brimstone-scented melodies and utterly blasting drumming that creates a veritable swarm of traditional black metal on display, serving as a great set-up to the uniquely enjoyable inclusion of localized tribal influences here. Many of the shorter interludes here uses this kind of tribal drumming and industrial noise collages to set up the upcoming track, which is a cool idea in principle but wears itself out when the idea of getting in tune with the release is instead shelved due to stopping the momentum in order to get to another set-up track for the song after it. This is a highly disappointing effect with the four true songs on here appearing so enjoyable that it does seem to ruin the energy built up here and really comes off with the idea that it should’ve been just one or two in select places rather than doing it for all the tracks.

The tracks here aren’t bad and come off rather fun. Intro ‘Aeonik Devotion’ features churning riffing and steady drumming along through the series of blackened tremolo riffing throughout the sprawling mid-sections with churning rhythms holding tight until the blasting drumming continuously blazing through the tremolo-soaked finale for an engaging and enjoyable opening effort. Instrumental interlude ‘Resonance’ features percussive tribal drumming and dissonant industrial noise together into a meaningless collage that interrupts the flow of the album as a whole before getting back to traditional tracks with ‘Prana Of The Drakon’ utilizing discordant drum-work and swirling riffing that tends to avoid the blasting patterns for the simplistic mid-tempo marches featuring bombastic blistering drumming and swirling brimstone-scented tremolo riffing that continually weaves through discordant patterns of varying tempos for the final half in a rather enjoyable effort overall. Another pointless interlude in ‘Phosfire’ again uses dissonant industrial noises and plodding rhythms that serves as a nice change into a minor flurry of tremolo riffing leading into proper track ‘Illuminate My Temple’ with plenty of light swirling riff-work and plodding drumming slowly working into a light pace with surging tremolo riffing turning into frantic blasting among the mid-tempo patterns leading into the series of start/stop tremolo riffing throughout the finale for an enjoyable effort. Again, the noise interlude ‘Tunnels’ features blaring industrial notes and trumpeting blasts sets up the epic album-closing title track which features light melodic notes that eventually turns into far more blasting and swirling traditional tremolo rhythms that takes on sprawling patterns with the charging atmosphere and intensity continues on throughout the final half for a fun if tad overlong effort to end this on a high note.

Though this one tends to rely quite a bit on the nature of featuring interludes for the main set-up here rather than letting the traditional songs seep through for it’s enjoyment, there’s still more than enough engaging black metal to satisfy fans of the style or those simply curious how it’ll appear when sprung forth from non-conventional arenas.

Does it sound good? Order from here:
https://www.facebook.com/formlessdevotion?fref=ts
Posted by slayrrr666 at 11:20 AM