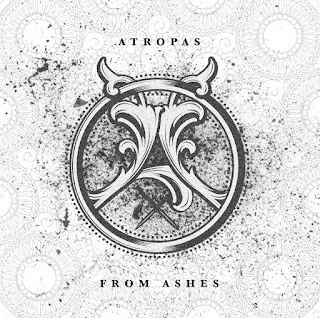 Attempting to expand their horizons, Swiss melodic death metallers Atropas have carried on from their past works which has taken their older influences into a stronger, more vicious attack that begins adopting more of a metalcore-influenced sound into their sound. Following up a little over a year from the last full-length release, this new EP was originally released December 2, 2016 on WormHoleDeath Records.

Charging along quite intently, the group offers quite an impressive overall attack here with their metalcore-inspired influences even more in the forefront of their sound. That becomes apparent immediately here with the influx of short, stuttering-style pattern sections alongside the sharp, chugging-based riffing utilized here which gives this a far stronger appeal for that particular style throughout here. Still, that doesn’t deter the fact that the jagged, angular patterns and pleasing melodic runs aren’t featured here as they’re still quite prominently displayed which get far more total running time throughout here which makes this one feel more intense and dynamic than most metalcore groups with their inclusion of these more traditionally-minded melodic death metal stylings that offer fluid rhythms that are charging in their intensity while still leaving plenty of room for their lengthier arrangements as the few epics come off rather nicely with the group able to shift from the tight chugging metalcore style into sprawling, furious melodic ragers together in a cohesive whole. Although this drops a little with the squealing vocals not really being all that intimidating and dropping some of the songs somewhat with their high-pitched screaming coming off grating more than anything, it’s not nearly enough to deter this from being quite the enjoyable mini-album.

As there’s not a whole lot really wrong here with this one and instead featuring plenty of enjoyable elements coming from a great understanding of their infusion of tight chugging metalcore into their sprawling melodic death metal that leaves this a solid pick for fans of either style or those curious to see where the band is heading.

Does it sound good? Order it from here:
http://atropasshop.bigcartel.com/product/from-ashes-new-ep-out-now-via-whd
Posted by slayrrr666 at 10:06 AM