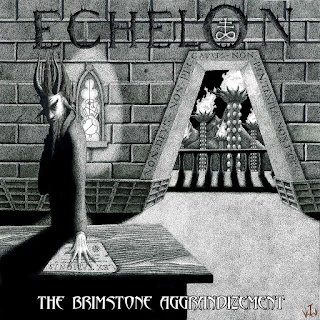 Much as could be expected here, the band is quite obviously yet another group that brings about its old-school death metal style to the forefront almost immediately. Filled to the brim with deep, churning riff-work that offers plenty of straightforward mid-tempo paced rhythms that are equally as frantic and intense as well as sharp and bludgeoning in their sprawling tones, it makes for a wholly appealing time. The fact that it’s all recorded at that warm, vibrant tone makes the riffing even more impressive here generating the sort of tactical approaches usually featured in the early days of the scene by switching from the tight, crunchy grooves favored in that scene while also employing slow, sprawling sections that feature wave after wave of heavy riff-work, pounding drumming and dynamic vocals into these dynamic rhythms that propel this one along. As it rages through these varying tempos and rhythm patterns, it really generates that old-school feel here without being cheesy or cloying as there are quite a few sections that trade in the churning riffs for spiraling tremolo-picked riffing or allowing for melodic overtones to the frantic, fiery solo sections and it all captures the old-school vibe exceptionally well. It does come off a little short here at times with the brief running time coming against it with the few tracks here, but it’s nowhere near enough to really hold back this one’s retro-themed fun.

Though it doesn’t really come with the full-on throwback to the old-school days with its brief running time holding it back somewhat, the fact that the vast majority of the album is still raging old-school themed death metal of fine caliber makes this a worthwhile choice for fans of the participants’ other bands or old-school death in general.

Does it sound good? Order it from here:
https://echelondm.bandcamp.com/album/the-brimstone-aggrandizement-death-metal-supergroup
Posted by slayrrr666 at 11:03 AM