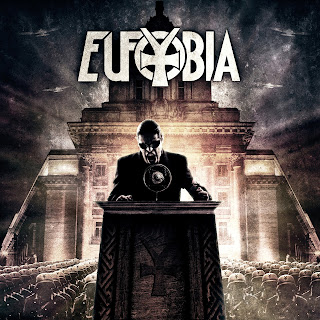 Finally coming back to the scene, Bulgarian death metallers Eufobia have managed to take their time away honing their skills on the live circuit to help prepare themselves for their newest full-length release. With a five-year gap between albums during this time, the group finally unleashes their self-titled third full-length album November 1, 2016 on long-time label Wizard.

Even without all the time off it’s still quite clear here that band is still firing along quite nicely here with their furious and charging blend of metal they’ve always been playing. The bands’ main focus is on churning, up-tempo hardcore-style riffing that adds a thoroughly ferocious bent to the music as they’ve gathered plenty of stuttering, confrontational rhythms placed alongside a much more fluid, energetic brand of traditional death metal. This results in explosive, straightforward bursts of short, sharp riffing that maintains an intense, aggressive atmosphere even with the inclusion of melodic elements in here while the choppy, discordant patterns throughout here continually bring about the album’s selected pieces of rhythms that bring about lively and truly explosive angular riff-work here to make it all quite fun. The album’s biggest detrimental factor here is one of coherence as the fact that there’s little about the discordant, chaotic material that makes a lick of thematic sense and comes across as wildly incoherent due to the rapid shifts in tone here. This comes from the punkish riffing interjected alongside it all, and it only adds to the scattershot flow of the album.

Though there are some pretty decent elements at work here, that doesn’t really change the fact that there’s so much of the album really filled with this wildly varied type of material which brings it down enough to leave this one mainly for fans of this kind of jarring, chaotic form of death metal or fans of the bands’ past works as well.