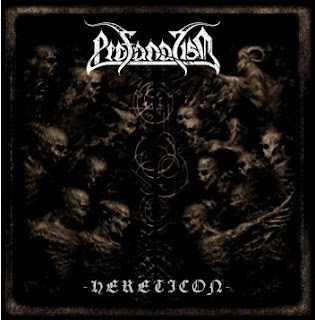 Founded in 2012, Polish black metal duo Profanatism quickly honed their skills in the underground scene with several different demos that allowed the band to perfect their craft and managed to bring out a split release as well to help the pair further refine their skills. Finally ready to unleash their first proper release, the groups’ debut full-length was originally released June 6, 2016 on Under the Sign of Garazel Productions.

Like so many of their Polish brethren, the bands’ quite clearly adept and proficient in the raw, driving second-wave style of intense black metal favored in the country. Still largely beset with swirling tremolo riff-work and a darkened series of rhythms throughout here, the fact that there’s a much larger emphasis on the raw, churning patterns that display a quite larger, impactful intensity to the tracks is much more evident here as this features the typical rhythm changes and discordant riffing found in that style. That series of discordant patterns allows this one to change from the blisteringly fast, raw tremolo-laced attacks to swirling, mid-tempo sprawling that offers tinges of industrial riffing and much more straightforward, loose patterns that contain much more simplistic chugging all brought into a cohesive whole usually within the same tracks, and that gives this a seemingly disparate sense of chaos with all the different elements working together to give this one the furious intensity by maneuvering through these differently-paced elements within the music. As good as that is, the fact that it really manages to highlight the small nagging factor within this one as being way too scattershot and disjointed that there’s quite a loose feeling running through the music as a whole, rarely feeling like a true collective of tracks with that distinctive series of disparate elements. These don’t offer the kind of pleasing mesh of styles as the swirling tremolo riff-work generating that typical sea of chaos while the sprawling industrial-tinged passages don’t really create any cohesive bonding together the way it’s intended, which is a fine area to work on as the band gains experience and carries on.

Though there’s a few flaws to be found here with the bands’ inexperience being brought to the forefront with some rather disparate elements being featured here, the fact that the bands’ far more intriguing traditional-style second-wave black metal approach that helps make this a worthwhile time for those that can handle the flaws and enjoy the second-wave style.