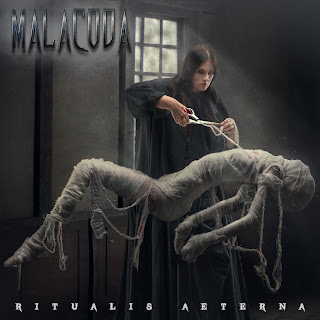 Containing a lot of the same elements, Canadian gothic metallers Malacoda have further expanded their dark gothic vision by including even more literary and visual influences into their sound since their previous release. As the lineup is now rounded out with the addition of keyboard virtuoso Jonah Weingarten into their ranks, the groups’ new EP is self-released December 2, 2016.

This here comes off as a rather strong and impressive release that has plenty of strong work at play here with the rather disparate elements coming together into a strong whole. For the most part here the band is clearly adept at delving into the grandiose Gothic imagery present here which is quite strong and prominent featuring plenty of the swirling riff-work, the utterly dramatic blend of rhythms here that delve from progressive-styled groove to bombastic symphonics overlaid with plenty of melodic interludes and a variance in the tempos all come forward into making this one flirt incredibly heavily with the dark romantic vibe present in the genre. These here work incredibly well for the band, but the fact that there’s not a whole lot else really going on here does affect this one as the band seems to just simply pound through their signature sound but that’s about it. It’s adept at their stylistic variation within the style, but otherwise, it’s just a mostly bland offering that never really reaches any kind of impressive  riffing that really comes off as quite bland without having any more impressive rhythms involved. On the whole, this is a competent if uninspired effort.

Though this one has some decent work involved, there’s not a whole lot else with this one going on that makes this one feel quite bland overall in terms of performance that this one really only seems worthwhile for the most devout and hardcore gothic/power metal fans or followers of the band members’ previous bands.

Does it sound good? Order it from here:
https://malacoda.bandcamp.com/album/ritualis-aeterna
Posted by slayrrr666 at 10:01 AM