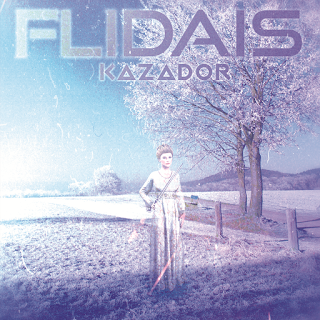 Continuing to hone their craft, Canadian progressive power metallers Flidais have comprised their central style of galloping power metal full of tight, bright melodies that are merged together with deft ease and execution that was a part of their original style. As original members Jordan Litt on guitars and Chris Darmanin on drums have left with only the latter being replaced by Ryley Swatman, the group’s new EP is original self-released December 2, 2016.

This here is quite the enjoyable release mainly due to the rather enjoyable nature of the band really offering quite an impressive attack here. Built upon the swirling, challenging progressive-tinged riffing that’s quite impressive how it manages to go for the variety of work overall here, is due to the bands’ insistence on featuring the riffing more as a straightforward gallop while still featuring plenty of challenging rhythms and patterns which give it a strong progressive bent. With this given a strong boost by the strong melodic outpouring throughout here due to the tight riffing and strong accents placed within the music, on the whole, this one carries itself pretty well here and doesn’t really strike as too detrimental in too many areas as the riffing is strong, the melodies are bright and the varied attack makes this one quite enjoyable. There’s one element that could use some minor touch-up in here which is the album’s tendency to stay within quite familiar stylings to each other so that a vast majority of the songs are blended together into the same general sound of challenging, churning riffing and bright melodies that sound good yet doesn’t strike as any kind of distinctive voice here due to the repeat style featured. It’s not a big detriment but it is there.

Though only hurt here somewhat by the relatively small aspect of their music with the commonly-used riff-work and rhythms making it blend into itself quite easily, it’s not nearly enough to let this one loose itself into that flaw and comes off rather nicely for fans of bright, melodic power metal or progressive-minded fans of the genre.

Does it sound good? Order it from here:
https://www.facebook.com/FlidaisMusic/
Posted by slayrrr666 at 10:41 AM