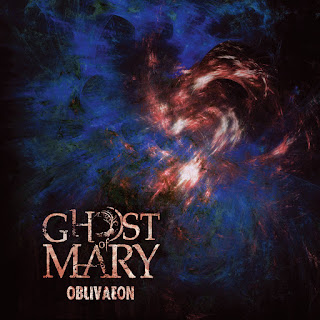 Formed in early 2014, Italian gothic/death metal newcomers Ghost of Mary have come together to add a great new voice into the genre with articulated and melodic progressive architectures and immersed in a dark atmosphere. Based on the original tale written by Daniele Rini as a sort of allegory about life and death, the group’s full-length debut was released December 2, 2016 on Revalve Records.

Coming off as a complete surprise, this here was quite the impressive and utterly surprising release that goes for the impressive and dramatic side of the spectrum. Ostensibly based on melodic death metal, the band wholly utilizes those rhythms and riffing structure with speed-driven, swirling patterns in their style to create a stylistically heavy, up-tempo album with plenty of galloping guitars and drumming together propelling this one along with the atmosphere found within a nominal melodic death metal band. Though this represents the main factor of the music, this is blended together incredibly well here by the inclusion of symphonic elements more in keeping with gothic metal in terms of using these elements to create a warm, romantic atmosphere within the music. This creates the appealing dichotomy of ripping, raging melody-tinged death metal with high-speed tempos alongside slower, lush atmospherics that goes together so well that there’s quite the intriguing and sound overall here. The main element against this one, though, is the fact that the album’s wildly-veering sonic style manages to make the vocal shifts appear wholly disproportionate for the type of music present which is somewhat of a stumbling block in the later half of the album. Given that deep, guttural style growl for a large portion of the melodic music just sounds awkward with the short, warm melodies and the cleans don’t fare much better either with their crooning becoming laughable in their attempts to interject melody into their rhythms especially on the attempts at balladry. Given that this is a debut offering, though, much of this is somewhat forgivable and doesn’t detract from this one all that much.

As it stands, there are a few problems here with the disparate vocal stylings throughout here, but the fact that being a debut there’s always a chance to fix this and it doesn’t distract much from the music at all which is far more enjoyable gives this one quite a lot of appeal to melodic death metal fans of those intrigued by darker gothic metal as well.

Does it sound good? Order it from here:
http://revalverecords.bigcartel.com/product/ghost-of-mary-oblivaeon
Posted by slayrrr666 at 10:59 AM