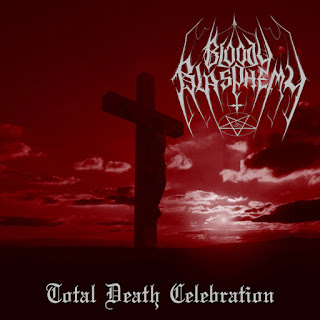 Formed way back in 1999, Swiss black metallers Bloody Blasphemy have taken their time to hone and perfect their blackened, raw sound as the decade-plus gap from their demo releases until now has given them the chance to finally offer it in the fullest old-school sense. Fully unleashing their massive first offering, their debut full-length was originally released April 26, 2016 on Via Nocturne.

For the most part here, this one seems to dwell in the same rather typical air of the second-wave worshipping acts that are pouring out at the moment. Filled with ravenous tremolo-picked riffing and plenty of tight, constrained rhythms that offer forth plenty of raw, dripping rhythms that are granted wide berths here due to their blistering tempos that are found here. That keeps these relatively speed-driven bursts of tremolo-packed cold, darkened black metal bursts and as the dominant feature here does pack enough of a punch to really generate that kind of furious rhythm sections to back the album’s more melodic quotients. Those are much more straightforward in their structure and offer much more simplistic riff-work and less frenetic patterns as the stylish melodies are thrown into the fiery, cold rhythms and they’re quite enjoyable as a result, but manage to highlight the first minor flaw to this one. The album is so simplistic in its delivery anyway that it manages to highlight these sections as quite problematic anyway that it really does seem to just offer up more of the same in terms of being a tremolo-blasting throwback with quite wonky rhythm changes. This has a habit of simply switching on a dime into rather dynamic variations within the tracks almost without any kind of warning or build-up, and the result doesn’t mesh with their intentions of blazing along these well-tread patterns. A much cleaner series of change-overs would’ve made for more dynamic material here rather than the straightforward, simplistic manner done here, which also applies to the massive eleven-plus minute epic that feels it’s weight quite often throughout it’s running time. Otherwise, this one wasn’t that bad.

With some stronger writing, which is a possible recurrence that can come with experience since this is still considered a debut release regardless of the bands’ longevity, this could become quite a fun genre offering that will still have quite a lot of appeal to fans of raw, cold-style old-school black metal or the second-wave worshippers that fall in line with the bands’ stance as well.

Does it sound good? Order it from here:
https://vianocturna.bandcamp.com/album/total-death-celebration
Posted by slayrrr666 at 10:48 AM