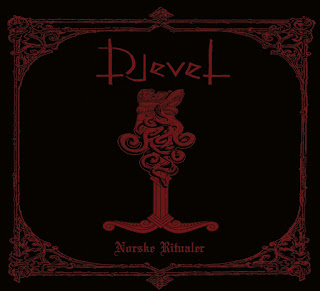 Blazing through the underground, Norwegian black metallers Djevel continues to lead their way through the old-school format as the traditionally-minded group heads out into the same fields and patterns normally reserved to the old-school ways which befit the band members collective experience. Wasting no time in releasing a new album in consecutive calendar years, the groups’ fourth album is released November 11, 2016 on Aftermath Music.

There’s little question here about the bands’ influences on this one, it’s all pretty much spelled out here from the very start with some rather immediate parts coming to the forefront of this one. This is a pretty substantial and impactful old-school release which carries those elements quite handily, from the swirling tremolo-picked patterns that are continuously flowing from ravenous bursts of up-tempo blasts to weighty mid-tempo sprawls throughout here, generating the kind of furious old-school assault that is completely capable of accomplishing this stylistic framework through the album’s epic-length tracks that allow for these types of patterns quite easily. Likewise, this also manages to incorporate the stylistic breaks throughout here where it’s able to weave haunting acoustic segments or ethereal chanting choirs into their pummeling attack which generates the kind of frantic departures within their rhythms that add that extra touch to the bands’ old-school showcase, and with the whole affair wrapped in that stylistic cold, freezing production that compounds the fiery tremolo riffing and thumping rhythm section it all completes the old-school experience incredibly well. That’s also the album’s main curse against it, in that the old-school approach is so heavy and prominent that it doesn’t really differentiate itself from the numerous other second-wave imitators in the genre which are quite prominent in the scene. They’re remarkably proficient and competent in this style, but it doesn’t change the fact that it’s quite a familiar approach is the main flaw present.

While the ravenous old-school tendency carried throughout here is the main problem associated with it, there’s little else that really strikes as being detrimental enough to allow this one to be of quite significant interest to any fan or interested party in second-wave Norwegian black metal.