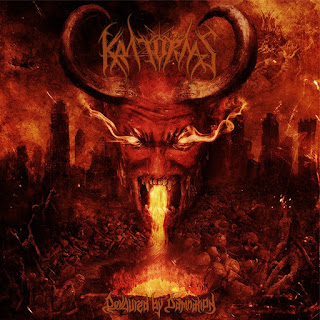 Keeping their third-world brutality intact, Phillippine-by-way-of-Canada black metal/grindcore act Kratornas prepares itself as the first properly recorded output of main-man Zachariah’s quest for the furious metal of his youth. With this being bands’ first output to be professionally recorded in a proper setting of any kind, their third full-length release arrives after a six-year gap December 8, 2016 on Grathila Records.

Fueled by their far-ranging influences, this here is a wholly chaotic and wide-ranging album with a slew of different elements present within here. The vast majority of the album is wrapped up in tight, utterly ferocious rhythms that bound along with plenty of frantic razor-wire riff-work raging along throughout here, which manages to capture the seemingly disjointed elements present into a cohesive whole. This one ranges from the blistering blasts of grindcore to the deep churning patterns of more traditional death metal and even incorporates the swirling tremolo patterns of black metal at various interjections along the track, capturing a wholly chaotic and disjointed feel here with this one never once carrying through a repeated pattern flying and charging along through the different elements present as the album’s wildly varying tone and approach works wonders for keeping this one surprising and off-guard. The gritty, raw tone and feel here is perfectly matched with the furious, attacking tone throughout the album and manages to give this the kind of dirty, unpolished sheen that makes for quite a ferocious and dynamic offering, yet also points out one minor factor glaring out from the release. The album’s disparate elements are conjoined together into a whole that sounds like loud, blaring noise at times as the riffing disappears into the mass of raw feedback and rough drumming which is all a part of the planned attack yet doesn’t allow the album any kind of distinguishing marks. It’s all quite lost in the sea of relentless rhythms and blaring noise, so it’s quite a distracting effort at times.

With only one minor factor present slowing this one down in simply being a little too chaotic and directionless with its approach, the remaining elements present here to make this one such an impressive and enjoyable release that it’s quite an appealing effort for those that appreciate the furious noise within.

Does it sound good? Order it from here:
https://kratornas.bandcamp.com/album/devoured-by-damnation
Posted by slayrrr666 at 2:42 PM