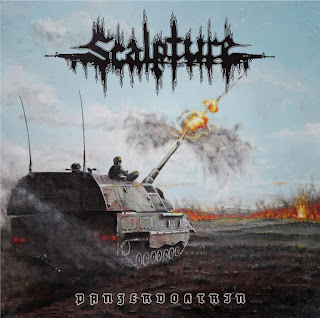 Founded in 2009, German death metallers Scalpture have taken the years to hone and refine a vicious death metal charge hailing their old-school sound into vicious bursts of death metal over the years which has honed and refined their attack into a lethal war-themed force. Adding second guitarist Tobias to the group for this release, the groups’ full-length debut is released December 1, 2016 on Final Gate Records.

From the start, it’s quite apparent that the bands’ old-school influences are getting shown at the forefront of the groups’ overall sound here. The basic intention here is the classic churning Swedish-style sound complete with that familiar grinding buzzsaw-style blast to the riff-work which offers a fine series of stylistic changes as the tempos offer up the traditional blend of galloping up-tempo thrash-paced styles to more mid-tempo chugging throughout here. Those mid-tempo paces are where the band explores the vast majority of times here and comes complete with the usual sense of sprawling patterns and melodic trinkling sprinkled throughout to add to a fine old-school sense of straightforwardness to the rhythms that keeps things simple, vicious and intense. When the band drops that in favor of the ravenous, blistering up-tempo work it fares quite well with the swirling patterns and melodic accents generating the kind of atmosphere that keeps this one charging along into that old-school vein which really gives this one a lot to really like about it. However good it may be, though, doesn’t change the fact that the music here is pretty much reliant on that atmosphere to such a degree that there’s no real originality present in the attack at all. The riffs, pattern arrangements and even the melodic interjections are cribbed straight from the Stockholm playbook and replicated with earnest and competent performances that really makes this one feel like numerous other bands in the style. It’s not detrimental in the slightest due to the enjoyment found within this as the music is well-played enough to make a difference, and again as a debut feature that doesn’t become as big a factor as it really could’ve been.

Despite not offering up a truly original thought all that often throughout here, the sheer earnestness and competency of their chosen style to utilize the Swedish old-school sound makes them quite an intriguing rookie to watch in the scene and really gives this one a strong appeal to Swedish-style death metal fanatics or old-school death aficionados in general.

Does it sound good? Order it from here:
https://finalgaterecords.bandcamp.com/releases/panzerdoktrin
Posted by slayrrr666 at 11:40 AM