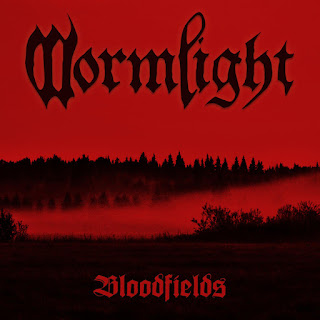 Carrying on from Unhallowed, Swedish black metallers Wormlight have charged forth after the name-change into the current moniker as the band continues to explore the same general sound within the new format. With a lineup overhaul that sees founder Deafeathered leave only to be replaced by Tiamat Invictuz who then took up guitar duties from a departing Nordlyst, the group’s new EP was originally self-released April 10, 2015 with a reissue December 3, 2016 on Black Lion Productions that sees bonus tracks with Invictuz on vocals added on.

Despite the name change, what’s on display here is still classic-era melodic black metal featuring all the aggression and intensity normally found within the scene. Full of galloping tremolo riffing that adds that characteristic darkened hellfire sound to the whole overall atmosphere, furious pounding drum work that is simply unrelenting and carrying through a truly explosive series of paces throughout here, the basic unrelenting charge offered here is quite the impressive burst of traditional black metal yet still manages to contain plenty of melodic accents. Churning away with a steady gallop throughout the rhythms by switching up the overall sound away from the raging tempos into a more straightforward attack that’s much more in league with the classic melodic black metal as the bands’ ability to switch-up these styles gives this a strong dynamic and variety that’s quite impressive and enjoyable. On the whole, this doesn’t leave much to dislike here as the band is quite adept at this style for the most part without really employing all that many flaws present.

As a fully explosive and generally appealing mixture of furious black metal rhythms with choice melodic accents interwoven throughout here and not really generating a lot of dislikes, this is quite the appealing package for those looking for quality melodic black metal or those appreciate high-quality extreme metal.

Does it sound good? Order it from here:
http://wormlightsweblacklion.bandcamp.com/album/bloodfields
Posted by slayrrr666 at 8:40 AM