Across the Burning Sky - The End is Near 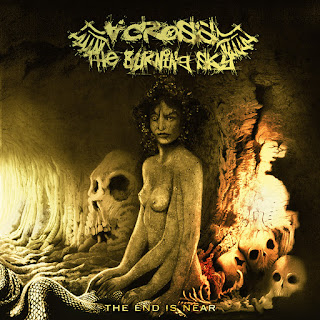 Formed just in 2014, Swedish melodic death metallers Across the Burning Sky have come together from a collective of scene veterans with nearly two decades of experience in the genre that have manifested themselves into the claim of old-school influences. With the group finally coming together to their first release, the debut full-length was originally released October 28, 2016 on MDD Records.

From the outset this here is pretty apparent and forceful about the old-school influences in their melodic death metal stylings by offering a charging variant on the style. There’s a strong simplicity inherent in this one by going for the generally energetic mid-tempo pacing while letting the more furious and pounding rhythms lead along into the more frantic sections that add a nice balance and energy to this one. Though it’s mostly simplistic, there’s a driving energy by meshing that within the melodic firepower of the main riff-work featured here which creates a wholly melodic and blistering sections here with the sweeping patterns firing off the melodic prowess in these frantic sections. That is a perfect display of their professionalism in their seasoned experience which comes off well here, but does manage to draw up the one small facet on display here in that the tracks are so straightforward and simplistic that it never offers up any kind of variation to enable the tracks to generate any kind of length here as this one is so short and over so quick that there’s the very likely possibility that this one turns into a shortened burst of material but then is just over and it really seems as though the tracks could’ve been expanded a bit more beyond just three-minute blasts of effective melodic death metal. Still, it’s the only real issue to have with this one.

With the fact that it’s just so quick and over so soon due to a real lack of variation within itself which makes this come off so short, there’s not much else really wrong here that really drops this one down as the main problematic issue here so that all fans of melodic death metal are encouraged to check this out.

Does it sound good? Order it from here:
https://acrosstheburningsky.bandcamp.com/releases
Posted by slayrrr666 at 10:40 AM