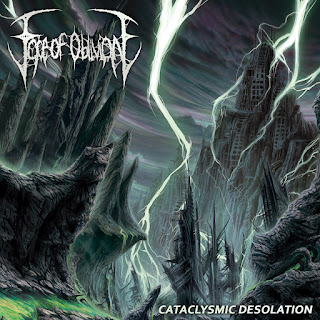 Staying true to their style, Minnesota-based technical death metallers Face of Oblivion are primed and ready to unleash their cacophonous soundtrack for the inevitable extinction that awaits mankind having honed their attack over the years. With former vocalist James Lee departing and now fronted by veteran vocalist Jesse Watson, the group prepares their highly-anticipated sophomore album November 11, 2016 on Comatose Music.

As befits their style, the band here is quite well adept at displaying an unwavering sense of technicality throughout the album and generally gets plenty to like with this set-up. This one does manage to align itself more in the modern-day school of tech-death as this mostly centers around the straightforward chug-happy style of riff-work found in the genre and then wrapping that into a highly technical series of arrangements that are played at blistering tempos and paces while being blasting by ferocious drumming and clanging bass-lines for a charging blast of technical overdrive. As that requires the majority of the songs played at impossibly blistering speeds, the variety comes from  the slight change in paces by focusing more on the chugging to keep this one slightly more focused on the complexity of the riffing twisting and bending through their arrangements than just blasting along with the greatest speeds possible, and the overall approach within this dynamic is really impressive. Still, this one is slightly undone by the fact that there’s just not a great deal of overall lengthy tracks on display here with the barely three-minute running times for the tracks making this one seem like a frantic, rabid assault despite the rather lengthy track-order and the ability to constantly shift through the various tempos and challenging riffing at these speeds does make this go by quicker than it really should, but overall there’s not a whole lot else really wrong here.

With a rather enjoyable burst of quality technicality and fine-attuned sense of chaos within the rhythms, this one works quite well except for the rather short running time that makes it seem far quicker than it really should even though that doesn’t stop this from appealing quite heavily to any fan of tech-death or modern death metal aficionados.