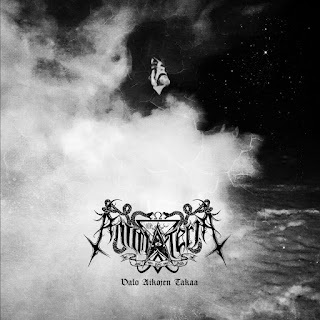 Emerging from the bowels of the genre, Finnish one-man atmospheric black metal project Antimateria has quickly gathered themselves into a force within the genre as main man Ahma has turned the project into a beast of celestial black metal magic. Quickly coming out with the projects’ first proper piece of recording, the debut full-length was originally released September 1, 2016 on Purity Through Fire Records.

From the start, it’s quite clear here that there’s a strong and profound sense of raw, celestial-worshipping black metal at hand. From the tight, churning riff-work that takes the simplistic tremolo-style series of patterns and merges them with a strong series of light keyboard work to really get this one going here. Even with the raw, gravelly production it’s still possible to discern the warm, lush atmospheric melodies swirling around throughout here which comes from the simplistic riff-work and rumbling rhythm section charging away in the background which manages to make for quite a stylistic contrast to the rest of the album here with this one really generating the kind of light, serene atmosphere that plainly keeps this in the genre for the majority of the running time. Given the fact that the extended, generous lengths of the tracks for the most part here, the ability to really let the melodies sink in and create the haunting atmosphere possible this really manages to make this hold up much more than expected with the melodies and rhythms coming together quite nicely, but the fact that the album’s thick, gravelly production style becomes the main problem here as this tends to reduce the type of variety and dexterity found within the riff-work and gives it a much too apparent sense of solidarity with the songs sounding much too similar and familiar to each other. The album comes off like a rather straightforward blur of simplistic riffing and driving-but-familiar drumming that manages to hold the atmospheric keyboards in check throughout here which doesn’t really detract it as much as expected.

Despite losing some of its power here with the thick, raw production featured here, the fact that there’s still a lot to enjoy here with the extended, atmospheric sections at play here really tends to give this one a big bump and makes this one work rather well for fans of this type of simplified atmospheric black metal.