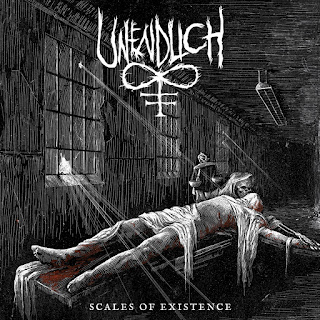 As was predominantly part of their previous work, the vast majority of the album transcends traditionally-flavored black metal with the basic formula of attack. Built around swirling, fiery tremolo-picked riffing and traditional European-accented rhythms that make this one stay in remarkably consistent paces and tempos for the most part, it’s all a rather fine and frantic series of composed chaos here. The riffing comes straight from that stylistic hand-book of attack and really generates the kind of aesthetic which keeps this one galloping along with this series of competent, professionally-driven charges here with the ability to accent these with snippets of melody that give this a decidedly apparent balance. That works nicely here for the album with this one able to retain a strong overall consistent vibe of bleak, blistering old-school riffing that keeps the attack simple and straightforward with their riff-work handling this approach in a consistent manner. On the whole, this is rather fun and intriguing, though it does have the distinction of highlighting the fact that this one doesn’t really offer up much of any big distinguishing factors here as this one simply offers up melodically-tinged old-school black metal which is competently played but that’s about it. On that rare occasion, it features some memorable riff-patterns but that’s not as constant throughout here which is a disappointment since when it does this scores mightily.

Though it does strike with a powerful, competently-played approach for the most part, it’s not as consistently devastating in it’s attack to really score into the upper echelon it easily could’ve which in the end does lower it slightly but not enough to make for a wholly enjoyable assault for any fan of this particular style of black metal.


Does it sound good? Order it from here:
http://unendlich1.bandcamp.com/album/scales-of-existence-2
Posted by slayrrr666 at 11:08 AM