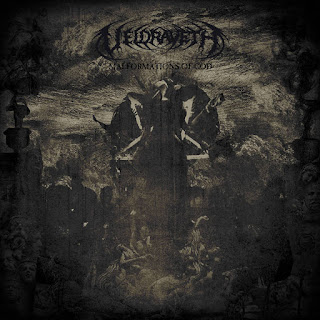 Coming up through the ranks, Venezuelan black metallers Veldraveth have taken a long, winding road from their start back in the early 2000s as they’ve brought more ravenous and devastating material that furthers their deadly attack even further. Taking their time to get the release right with a lengthy six-year break from albums, the trio’s third full-length album was originally released March 26, 2016 in a co-release from Satanath Records and Evil’s Records.

Marching along with impunity, the group offers a wholly caustic and explosive old-school style attack that charges along with quite a devastating tone. Led by the tremolo-based riff-work that carries this one along into tight, frantic set-ups that offer straightforward, simplistic tones without really deviating much from this basic framework, offering up the kind of darkened bouts of fury that’s wholly engaging here when the band is clearly in their furious stages. Balanced out by a series of mid-tempo sprawling patterns that act as buffer-sections that are kept to a minimum throughout here rather than being placed at the forefront of the album and a series of challenging, intricately-designed epics that bring forth more stylized tremolo-picked patterns as well as charging thrash-influenced segments that add a dynamic sense of chaos to the proceedings, overall this is a furious if slightly familiar attack while becomes the albums’ main failing point here. However enjoyable the blasting chaos and furious intensity derived from the riff-work may be, there’s still the overriding sense of being far too close to the source material to really generate the kind of creativity featured here that allows this one to stick out here as this one tends to feel way too similar to dozens of other acts in the genre playing this particular style and it really does lower this one slightly.

While there’s still plenty of highly enjoyable elements found here that makes for a truly enjoyable, vicious and intense black metal album, the few flaws present here are enough to placate those enough here to leave this one more for those who prefer the South American style of black metal or prefer the more intense stylings in the genre.

Does it sound good? Order it from here:
http://veldraveth.bandcamp.com/album/malformations-of-god
Posted by slayrrr666 at 11:48 AM