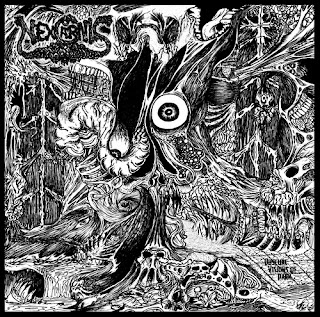 Formed in early 2012, Iranian death metallers Nex Carnis have steadily and quickly risen from their humble beginnings to craft a series of impressive old-school-style death metal that becomes quite prominent throughout here. With the group expanding out into a three-piece now with Jirka "Jurgen" Zajíc joining in on drums while Sam works as a session bassist for founders Incruent and Asto Vidato, the groups’ debut full-length was originally released May 23, 2015 on Nightbreaker Productions.

This here was quite the impressive outing in the genre, and really manages quite nicely to get the old-school feeling down quite nicely here. Bolstered by churning riff-work and plenty of tight, straightforward patterns that carry that syncopated style of riff-work along throughout the tight and energetic paces filled with rumbling rhythms pounding out the simplistic riffing as well as more of a plodding mid-tempo series of work carried out by the choppy chugging riff-work throughout here, the album as a whole tends to offer a great variety and dynamic that works itself into a series of aggressive-minded efforts that are quite enjoyable. Though nowhere near the technicality of their brethren, this type of variety makes for a much more appealing attack than necessary while managing to work in the melodic sweeping that gets sprinkled through several tracks here that furthers this balance quite nicely. Though it’s quite an overall effective balance and features a solid enough attack here with these elements, the fact that there’s just not a whole lot else to really glean from these few tracks here as the overall short length here doesn’t really become a huge factor but is really noticeable with the few tracks here. Still, as a debut effort this does serve as a minor point of contention without being too detrimental.

With a truly enjoyable attack and a few slight problems deviating mainly from a slightly too short running time caused by not really providing enough music to really exploit that quality to the fullest, this is a highly engaging and enjoyable album that will certainly be worthwhile to all fans of old-school death metal or those curious about the regions’ specific output in the genre.

Does it sound good? Order it from here:
http://www.nightbreakerprod.com/store/nex-carnis-obscure-visions-of-dark-cd
Posted by slayrrr666 at 1:38 PM