Solitude (Jap) - Beneath the Sky 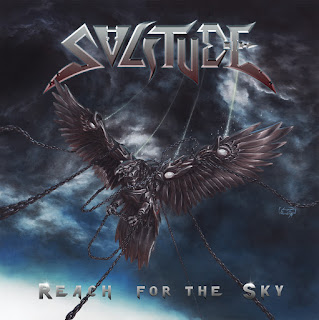 Finally reaching US shores, Japanese metallers Solitude have worked long and hard to make inroads on this side of the Pacific as they’ve managed to create quite a name for themselves in their homeland being the base label for many foreign releases in the Japanese market. While taking a nominal six-year gap between releases, the group releases their second album originally June 17, 2015 on Spiritual Beast before a US release November 25, 2016 on Test Your Metal Records.

Immediately blasting forward with an impressive charge, the group offers up a furiously intense and engaging blast of modern-sounding old-school heavy metal. The tight, crunchy riffing is the album’s greatest highlight, giving this one the fine ability to withstand a solid mid-tempo chug that gets featured throughout here or fire away on intense, nearly thrash-style rhythms such is their speed and ferocity. That, in particular, generates a raucous, energetic sheen over the whole section utilized with the efforts stylized and highly-appealing dynamics in the riffing which creates quite a fun time throughout here as the album manages to highlight quite effectively within enjoyable elements. Even when featuring thoroughly engaging work here with the explosive soloing on many of the tracks as well as the ability to dip into melodic accents to the riff-work when the group employs their mid-tempo style, the album is quite consistent and carries itself incredibly well while still being able to give itself a great sense of variety throughout here. About the only real issue here could come from the album’s raw vocal display which seems to be a much more personal issue here as on the whole it’s not terrible but the gruff style might not be all that enjoyable to some as it takes some getting used to that style in order to really enjoy it. Once it happens, though, that’s really all that really holds this one down.

A truly enjoyable and engaging blast of furious heavy metal thunder, there’s not a whole lot of really detrimental elements found here to hold this down and gives this one the overall kind of appeal awarded for fans of traditional heavy metal, Japanese variants of the style or generally ripping classic metal in general.

Does it sound good? Order it from here:
http://www.testyourmetalrecords.bigcartel.com/product/solitude-reach-for-the-sky-pre-order
Posted by slayrrr666 at 10:44 AM