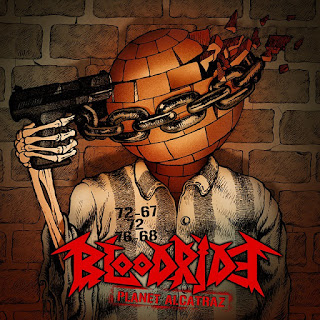 Continuing to rule in the old-school, Finnish thrashers Bloodride has steadily gained their style and approach quite readily throughout the years while taking their influences into a rather fearsome, ferocious assault. Keeping their consistency intact once again throughout their sound, the group’s third full-length effort was initially released November 25, 2016 on Inverse Records.

From the beginning notes this here is quite apparently a rather ferocious and charging blend of old-school riffing with a more vicious, modernized bite. There’s a great deal of old-school influence here in the riffing which takes that predominantly crunchy up-tempo style into the majority of the album’s paces and creates some rather frantic and finely-stylized thrashing patterns here. Likewise, this approach is styled nicely alongside a more vicious tactic of whipping up groove-styled rhythms and patterns in the riffing and coupling that with some deep churning death metal-styled patterns for a rather impressive blast of extremity against the more vicious attack. This is quite a fun attack though it tends to end up giving this one a rather troubling nature of not really being able to realize it’s true potential by keeping it wildly veering between the more ravenous old-school approach as well as the more deeply-churning energies that aren’t that well-constructed and keeps this off-balance throughout here. It’s enjoyable enough as it is, but the manner of making all their elements coming together into a coherent whole is a slight misstep.

There’s some troubling nature here with the rather troublesome writing that doesn’t generate the kind of consistently-coherent feel that the material really requires of it, though the fact that it’s still got enough enjoyable elements makes for a somewhat straightforward appeal to the most devout old-school thrasher fanatics only.