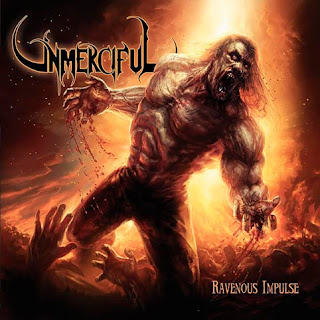 Coming back to active duty, Kansas brutal death metallers Unmerciful had initially set themselves up as a standard-issue band in the genre that hits plenty of the proper notes in that style to create a lasting impression in the brutal death field. With a decade off between releases that has seen numerous lineup changes with guitarist Jeremy Turner returning to the bassist role and seeing new vocalist Kris Bolton and drummer John Longstreth joining the fold, their second full-length is originally released July 22, 2016 on Unique Leader Records.

On the whole this one is plainly based around the furious and utterly frantic blistering rhythms that manage to feature the traditional penchant for tight patterns throughout here. This one goes through the typical sweeping blend of high-speed riff-work full of dexterous, highly-technical rhythm changes and tempo switches that works this into a frenzy of complex arrangements that are displayed with plenty of skill and competence, giving this one a generally dynamic crunch which works well here alongside the utterly blistering drumming. Matched with the band’s penchant for slowing the chaos down and letting the deep chugging riffing and more mid-tempo paces take over, the overall display of tight brutality and unwavering technicality is firmly established from the outset. Despite the unrelenting attack, there’s still a few small issues to contend with. For as great as this approach is, it’s highly familiar and plays way too similarly to dozens of other brutal/technical death metal bands in the genre as well as what’s on the band’s current roster home as well. This attack of complex riffing and tight, chaotic patterns in brutal death metal is quite common-place and results in this one feeling quite familiar rather quickly in here and leaves this one without a great deal of work to really settle into their own spin on the formula beyond its unwavering competence. That works for a while, but after a while it tends to wear off which tends to be this one’s main undoing.

Though it can be quite familiar at times with it running into quite similar areas as dozens of other bands in this style, there’s a fine display of technical proficiency and enthusiasm found here with the energy coming off the tracks more than enough to make this a fine choice for the brutal/technical fanatics or the more undiscerning extreme metal coinessouir.

Does it sound good? Order it from here:
https://uniqueleaderrecords.bandcamp.com/album/ravenous-impulse
Posted by slayrrr666 at 12:24 PM