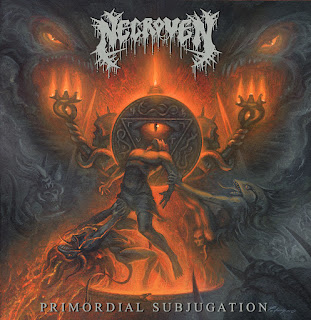 Continuing to honor their influences, Spanish death metallers Necroven have brought out a series of blistering, seething styles of death metal brought about by their unrelenting rage into a series of dark, festering cryptic music. Taking a four-year gap from their last full-length album, and only a two-year gap from their last overall release that sees mastermind J.R. joined by full-time bassist F.C,, the groups’ second full-length album was released October 24, 2016 on Memento Mori.

Almost immediately this here is basically centered around the idea of utilizing the old-school manner of attack throughout with plenty of explicitly enjoyable rhythms due to this. Firing off plenty of razor-sharp and churning old-school rhythms throughout here with a violent intensity, the main approach here with the riff-work is that semblance of stylized churning patterns that offer up plenty of strong sprawling patterns throughout here which come together with the series of darkened riffing to create a tight, nearly blackened atmosphere that’s wholly impressive and damaging when the band unleashes the full force of this assault. When coupled with the sparkling tremolo leads over the top this becomes all the more closely associated with the grand dark atmospherics and generates the kind of truly blistering setting for the band to really explore that to the fullest, yet it also highlights the first of the album’s few, barely negligible flaws. The main issue here is the fact that there’s just not a whole lot of opportunity for the band to readily explore many other elements here with the bands’ mostly straightforward approach running throughout the tracks not allowing it to really go anywhere else. This here is so strictly a single-minded assault of old-school influenced death metal that it doesn’t do anything really different here in the rhythms which are so steadfast in their determination to homage that style that it ends up dragging out the songs a little too long that, incidentally, is the other minor issue here in that there’s little reason for the songs here to be this long other than cover for the shorter run-time and especially running in the strict old-school manner as it does here. Still, these here are all that really crops up about the album.

While there’s not a great deal of innovation or variety here with the band blasting through their old-school worship in a relatively straightforward manner, the majority of this album works with a sense of dark, intense atmosphere that should make this wholly appealing to old-school fanatics or fans of this style of revivalist death metal.

Does it sound good? Order it from here:
https://www.discogs.com/Necroven-Primordial-Subjugation/release/9258361
Posted by slayrrr666 at 12:41 PM