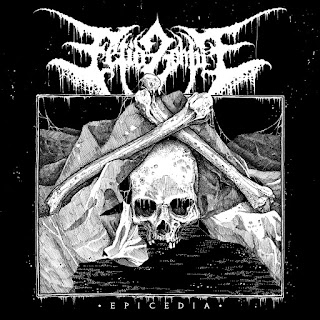 One of the undergrounds’ more creative entities, Virginia-based death metal project Fetid Zombie were created to explore main man Mark Riddick’s boundless enthusiasm for the dark and decrepit spirit of the old-school variety. Following up the endless amount of split releases throughout the year, the project’s sixth full-length release of original material was released November 25, 2016 on Transcending Obscurity Records.

Still hailing true to the underground spirit of the material, for the most part this mostly sticks straight on with the rampant style featured in the past catalog. Running through the same typically simplistic rhythms and variations that were found before, there’s plenty of tight, straightforward basement-dwelling material found in here which allows this one to readily generate dark, swampy rhythms that carry on through more advanced and dynamic structures here with the album’s admittedly-impressive attempts at deriving an epic attitude throughout here which comes off rather nicely with the swirling epic rhythms leaving this one quite enjoyable. With the ability to adopt lengthy, roundabout melodies full of epic splendor or deep, churning riff-work full of that predominantly old-school material. Though the band is quite enjoyable and certainly manages to get quite a lot of impressive work here, the main factor holding this one down is quite apparent from the start here in that the overlong tracks trailing off into rather bland realms merely to get things up to the epic lengths featuring these swirling riffs which just don’t seem to go anywhere. Much like his nominal work in the past, this would’ve been far more enjoyable and engaging at a more reasonable style and tempo, even though there’s not all that many other elements that hold this one back.

It gets a touch too long in the tooth for itself a few times throughout here, but that doesn’t stop the fact that this is still a highly enjoyable and engaging blast of furious old-school inspired death metal that offers a high quality for those that are fans of his previous efforts or aficionados of old-school death metal in general.


Does it sound good? Order it from here:
http://fetidzombiedm.bandcamp.com/album/epicedia-death-metal
Posted by slayrrr666 at 9:40 AM