Heavydeath - In Circles We Die 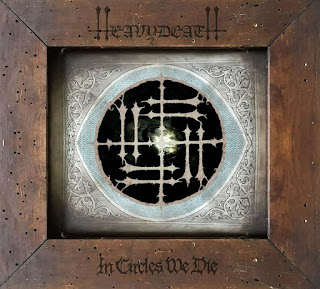 Continuing to expand on their sound, Swedish doom/death metal supergroup Heavydeath have taken their years of experience and brought about a rather pronounced and highly effective ode to the old-school sounds of their homeland. With the power-trio wasting no time in ushering a slew of releases, their second full-length effort was digitally-released independently November 1, 2016 before a CD reissue November 4, 2016 on Aftermath Music.

As is to be expected here from the sound of the album, the main focus here is on the crushing doom atmosphere throughout here which makes for quite a fun time. Featuring plenty of monolithic rhythms, loaded with that filthy sludgy sprawl typically associated with the style with the low-slung, barely-moving rhythms keeping this one locked tight in the rhythms throughout here as this one tends to opt for the classic dredging tempos without any real change in the matter which lets the deep, churning riff-work come to a nice head here that lets this one adopt a more ferocious atmosphere during these sections with the lurching tempos letting the riffing come to a more deep and churning centerpiece. This results in some rather fun and engaging pieces at times and is certainly a major part of the album’s success while also managing to highlight one of it’s few minor flaws in the fact that it really does feel it’s weighty presence at times. The slow, dragging tempos are rife with atmosphere, but at the same time completely opening up the album’s running time with the fact that this one really contains quite lengthy tracks that simply plod along lifelessly with barely any energy or weight behind them as the riffing descends into dull noodling as the drumming becomes limp and lifeless doling out the tracks as this is so prominent in the later half there’s little about it that remains as effective as the first half. That part is what makes the album as good as it is.

Though it runs afoul of itself slightly in the later half, there’s still more than enough quality and consistent material to be found throughout here that this one becomes quite a fine and worthwhile release for fans of the musicians involved in the project or appreciate this style of slow, plodding old-school death-influenced doom metal.

Does it sound good? Order it from here:
http://heavydeath.bandcamp.com/album/in-circles-we-die
Posted by slayrrr666 at 9:48 AM