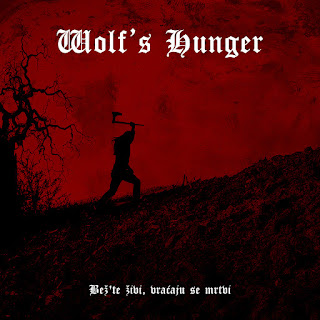 Continuing to struggle against the odds, Serbian thrash/black metallers Wolf’s Hunger have taken their love World War I, Serbian history and Slavic heritage to the fullest as the group presents another hellish uncompromising and merciless attack. With a nine-year gap having a slew of line-up changes as guitarists Rastko and Milan left, former member Dovla returned as the second guitarist was filled by Igor Marić, drummer Milos Stanic left and was filled by Ivan Gašpar, the group’s second full-length was released September 9, 2016 on Symbol of Domination Productions.

Immediately from the start, it’s apparent throughout here this one goes for the type of explosive, raging rhythms that’s become quite apparent in their discography. Leaning so heavily on the thrash stylings for their work here, this one readily features the tight, bouncy riff-work that generates the style and tone of those earlier stylings quite nicely which comes from the generous ability to shift between the ravenous, full-throttle rhythms or the sprawling, meandering riff-work that keeps it all contained in a cohesive, dynamic state. Rarely deviating from these styles makes this one quite the impressive and truly immersive album by allowing a series of generously-padded elements to function within the exploits of the album’s penchant for fiery riffing and ferocious patterns that come from the occasional introduction of frosty arrangements and tremolo-picked riffing that denotes it’s black metal pedigree. While that leaves the attack here for the most part exceptionally fun and enjoyable, it can lead to a lot of overly stale and repetitious writing here as the bands’ determination to remain in these patterns keeps this from really exploring that many altogether different realms of their sound being so stuck here utilizing so many repeat performances of their admittedly-fearsome full-throttle rhythms or tight mid-tempo chugging patterns which are well in appearance here. Overall, it’s all that really holds this one back.

Not really offering up much of a problem that’s all too damaging and detrimental here, this one comes off a little repetitious but still fierce and fiery enough that the fans of the genre’s stylings or those that can appreciate the bands’ localized flavor will wholly enjoy this one.

Does it sound good? Order it from here:
https://symbolofdomination.bandcamp.com/album/sodp068-wolfs-hunger-be-te-ivi-vra-aju-se-mrtvi-2016
Posted by slayrrr666 at 10:25 AM