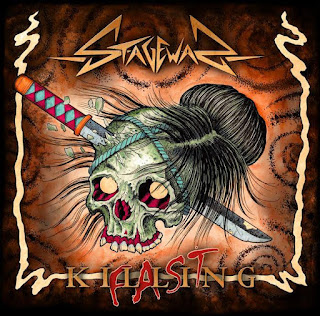 With a fine set-up within their style, German thrashers Stagewar have built a fine following with a strong dedication to the live format which has made their tight, short and to-the-point thrash stylings all the more potent and devastating. With the quartet taking a five-year break from releases to hone this style, the groups’ second full-length effort was originally released October 28, 2016 on Bacillus Records.

While at first glance the band is clearly influenced by the shorter, raging punk-influenced end of the thrash genre, there’s more at work within this one. While the riff-work is definitely fiery and engaging as is to be expected with the punk influences shining through, there’s also a prominent crossover theme running in here with the penchant for tight, confined swirling rhythms played in simplistic, straightforward manners here. There’s little time to get bogged down in completely irrelevant areas like rhythm changes or tempo dynamics, as the band instead chooses to fly through the vicious material with a straight-laced intensity that comes off with very few moments without that let-up and lack of aggression, which is a lot of fun throughout here. That does end up making this feel incredibly one-note and quite bland for the later parts here as once this one gets a few tracks in it’s already signaled its intentions and tricks by then and the realization that it’s not going to really deviate much from this style throughout here does undo some of the good will and enthusiasm featured as it’s not going to get much different from what’s on display there and that ends up causing this one to feel somewhat overlong despite the tight, confined rhythms here. Still, that this is quite fun and energetic at this style anyway does serve this one quite nicely anyway.

Despite the fact that there’s not a whole lot of original or variation within this one, there’s just not much really wrong here with the energy and intensity of their attack which is much more important in this regard so that those hardcore/crossover thrash fans or like the punk-infused thrash will find more to like here while more traditionally-minded thrashers should heed caution.

Does it sound good? Order it from here:
https://www.amazon.com/Killing-Fast-STAGEWAR/dp/B01M0GBAAM/ref=tmm_acd_swatch_0?_encoding=UTF8&qid=&sr=
Posted by slayrrr666 at 11:49 AM