Warfist - Metal to the Bone 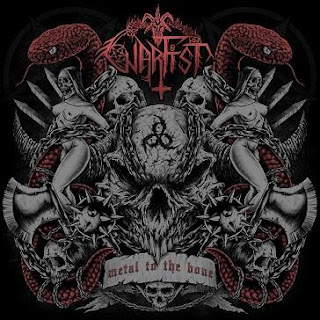 For over a decade now, Polish blackened thrash metal power-trio Warfist have steadily gained their experience and their style of explosive underground-flavored thrash and black metal which was fully realized with their previous release. Now, two years after that initial charge, the band offers even more of their fiery charge with a fully-immersive sophomore full-length released October 30, 2016 on Godz ov War Productions.

As was prominent on their previous release, the majority of the album here comes from a series of rocking and explosive high-energy mixtures of black and thrash metal. The vast majority of the album charges along with high-energy riffing and straightforward, charging thrash metal rhythms that keep the material tight, crunchy and utterly rabid in their speed and energy that keeps this centered around the tight charging energies from these patterns. With the ability to wrap these high energy efforts with more tight, plodding tempos featuring some heavy-handed chugging which counter-balance the ravenous, thrashing here the end result is quite nice and makes for some well-rounded times. Given that this material is all meshed together with a dirty, blackened atmosphere with the inclusion of several series of tremolo-based riff-work into the thrashing, this energetic and rousing material is given quite a healthy and impressive boost and further solidifies the bands’ connection to both genre style-points. They also manage to strike up the biggest negative which is the rather overt and seemingly one-note attack which doesn’t alternate any between these ravenous rhythms which are played out throughout the album. By staying so straightforward and unyielding in it’s approach there’s not a whole lot of chances to really get the variety going throughout here and it leaves the album so straightforward that there’s a pretty simplistic attack. This here is really the only thing that really holds this one back.

With some rather straightforward and unyielding attack that doesn’t offer up much of any chance for variety or deviation here, the sheer speed and utterly blistering attack is for the most part far more effective and dynamic that it really overcomes a lot of these issues and makes for quite an appealing effort for black/thrash fans or extreme thrash aficionados.

Does it sound good? Order it from here:
https://godzovwarproductions.bandcamp.com/album/warfist-metal-to-the-bone
Posted by slayrrr666 at 11:49 AM