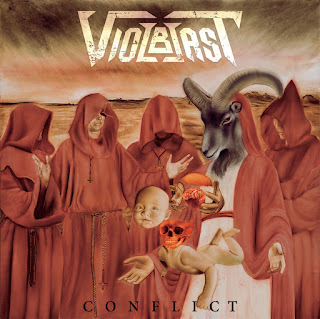 Formed as Betrayer in 2012, Spanish thrashers Violblast quickly adopted their current moniker in order to perform quite vicious and intense thrash throughout their homeland which enabled them to hone their craft into a debut EP release. After several years of promoting that release, the group finally prepares their full-length debut November 25, 2016 on Suspiria Records.

From the start, this here comes off as a tight, ravenous and fully ferocious offering with plenty of truly thunderous and vicious thrash on display. Employing a far more tight and modern form of the style here with a slight old-school bent, this one goes for the ravenous approach in it’s riff-work with great results here with the crunchy patterns clearly putting this one in the thrash realm keeping this one flying along at truly explosive rhythms due to the high-flying speed on display. That offers the highest value here within this one as the album just flies along quite ably diving into tight thrash patterns in the riff-work while utilizing a series of straightforward arrangements to carry this along while still managing to get a large amount of work out of the occasional use of classic thrash-era arrangements which adds an extra dose of chaos to the proceedings by balancing up the truly ravenous sections against more controlled and refined segments which makes for a truly enjoyable thrashing experience. The main minor stumbling block here comes from the album’s tightly-wound riffing structure which doesn’t really let the album breathe all that often and causes it to zoom by way too quickly here as there’s not a whole lot of really lengthy pieces here. That could’ve given the riffing the space to really work wonders had it just been stretched out by a few minutes overall with a couple extra moments on each track to really give this one the opportunity to really enjoy the fruits of its labor, which can be a factor to explore in the future.

Managing on a few minor problems that really could be worked out in their future work, this ends up being quite the enjoyable and explosive ravenous thrash album with some old-school influences that works incredibly well for those that enjoy this more intense side of the genre or want something more than just another Bay-Area ripoff.

Does it sound good? Order it from here:
http://violblast.bandcamp.com/album/conflict
Posted by slayrrr666 at 10:35 AM