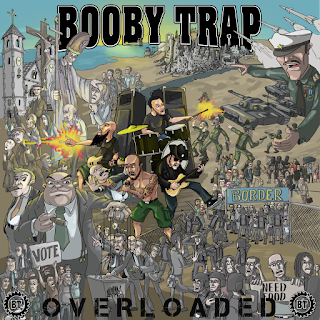 Continuing to lead their country’s charging scene, Portuguese crossover legends Booby Trap have steadily built their legacy and reputation on the intensity and aggression of their youth as they continue to display their old-school influences. Taking a three-year gap that marks the recording debut of new drummer Hugo Lemos, the group’s second album was released October 17, 2016 on Firecum Records.

Still utilizing their old-school sound here, the bands’ still quite adept at managing to perform their rather frantic and engaging brand of material. Full of raucous and truly gripping thrash-style patterns alongside the hardcore influences still at play throughout here, this one manages to really generate the kind of high-energy style that remains quite prominent of the crossover style while working the tight, frantic rhythms into generally vicious runs of static, swirling hardcore patterns with the thrash connecting it all, which lets this one get in the usual feature of the genre with the vibrant, charging tracks and shorter running time usually featured here. Still, even with all this great work, there’s still the main issue here that manages to get attached to almost all crossover acts in that the influence of the hardcore riff-work here generally makes for quite a scattershot and generally haphazard series of attacks here that comes off far sloppier and much more amateurish than expected. Though it captures a raw, raucous energy quite well, that doesn’t really translate well into a professional-sounded tone or approach here which gives this one the kind of approach and appeal that doesn’t really serve it all that well. Likewise, the fact that this one features way too many pointless interludes to break up the tension which consists of lame sound-collages or skits from sampled soundbites that really aren’t that funny and only serve to showcase that amateurish side even further which is all mainly included simply because of the crossover influence. It’s really the biggest obstacle holding this one back.

Though it does fall victim to a large amount of structural issues that plague so many crossover bands, this one still has more than enough to like about it’s wild, raucous high-energy affair that it should be quite the enjoyable and appealing effort for fans of the bands’ past or the style in general.

Does it sound good? Order it from here:
https://www.facebook.com/firecumrecords
Posted by slayrrr666 at 10:30 AM