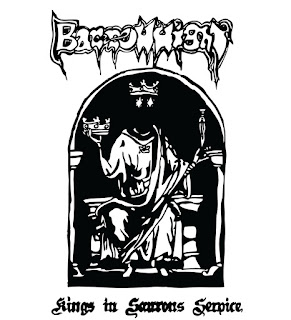 Founded in 2006 by high-school friends, Canadian metallers Barrow Wight have quickly taken the band’s sound to a venom-charged, reverb-fuelled heavy metal punk nightmare through the years as they’ve refined and honed their sound. With two years of work touring and preparing material having secured a stable line-up comprised of Antero on vocals/bass, Akiva on guitar, and Ace on drums, the group prepares their debut effort September 30, 2016 on Heavy Chains Records.

As evidenced by their thematic imagery, the group is quite clearly at home employing fantasy-style work here to their simplistic dirty heavy metal style. The riff-work takes plenty of cues from straightforward punk-laced early traditional metal as the chug-heavy rhythms and unvarying style make for a rather simplistic style of attack while being augmented by rumbling bass-lines and pounding, straightforward drumming that doesn’t deviate from the norm all that much, keeping this one solely one-note throughout here in terms of presenting rocking, high-energy punk rhythms within simplistic heavy metal. As that becomes the most prominent aspect of this one, though, that leaves the album so simplistic and single-minded that it really does this a disservice by simply offering only slight tempo deviations for any kind of variety and on the whole there’s just not a whole lot of really engaging material here once it lets the tricks of the trade be presented. There’s not a whole lot really wrong with this attack, which does come off rather nicely here due to the influx of rumbling heavy metal and fiery riff-work throughout the album, but it’s just way too simplistic to really count with the short and to-the-point running time of the majority of the tracks certainly not doing that any favors, though this here does get a slight pass for not only being a debut release from the group and a chance to rework that could be highly beneficial in the future.

Though there’s some solid work at times here, the fact that there’s just not all that much work here that really brings this one up from the mediocre realm ends up causing this one to mostly appeal to die-hard fans of the dirty rocking style or those that really enjoy the other facets of the band on display throughout here.

Does it sound good? Order it from here:
http://www.heavychainsrecords.com/shop/cds/barrow-wight-kings-in-saurons-service-cd
Posted by slayrrr666 at 12:16 PM