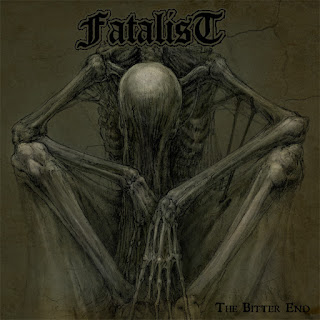 Initially appearing in the mid-2000s, California death metallers Fatalist quickly gained notoriety for their sincere and dedicated approach to the Swedish variant of death metal before a disbanding before a rebirth two years later that sees the band back and tighter than ever. Being the first recorded output for drummer Griffin Figueroa after Tyler Castro left following the reactivation of the project, their long-awaited true full-length debut is released September 23, 2016 on F.D.A. Rekotz.

It’d be hard-pressed to believe this wasn’t a group of Stockholm-centered youths emerging from the early-90s scene here such is the powerful and utterly unrepentant approach this takes with the Swedeath scene. This goes for the ever-present and familiar churning riff-work that contains those loud and proud swirling patterns and charging rhythms that were commonplace in that initial scene, buzzing away with abandon while the ferocious riffing keeps this one moving forward at a grand pace. Likewise, there’s also the genre’s prototypical mid-tempo efforts that let the pace down in favor of sprawling riff-work and more prominent melodic work which gives these efforts much more of a variety compared to the type of work found elsewhere here as the most ferocious tracks here are much more prominent throughout here. Granted, this here is all to be expected to be a part of this one with the band playing so closely to the genre’s heyday that there’s not much of a surprise here in many of these tracks. It’s all too familiar and goes through too many of the scenes’ cliches that there’s not much of a real identity to the band here with them playing with these tracks in such an approach, even though there’s a competence level to the material that does make for a somewhat more appealing time here than would be expected. Still, it’s an issue that does occur here and holds it back somewhat.

Even though it’s so obviously a part of the same scene as dozens of different bands here and that nothing here is all that different from those groups, this one still carries enough of a positive charge here that this is a fine choice for the most diehard and ardent Swedeath follower while those looking for more impactful work should look elsewhere.